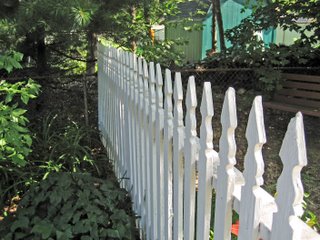 I actually know where there is a garden that was featured in Country Gardens magazine, Fall 2003 edition.

So, if anyone thinks that those gardens are faked or staged, I can safely say that at least one of them actually exists. And in person, it is an impressive garden, even though I know that they probably did move around some of the garden ornaments, etc. to make some of the pictures just a little bit better.

The house and garden are in Crown Point, Indiana, about 165 miles north of me. I had to drive up there for work today and realized I would just be a few blocks from what I call “the garden lady’s house” and so I made my co-worker traveling with me take a little detour to see the garden. It is on a corner lot, so you can see into the back yard as you drive by.

Unfortunately, I did not have a camera with me, so I can only provide a picture of a fence that is typical of the fence in that garden, but not the actual fence. (Just setting the mood!)

I also can’t seem to provide an Internet link to the article, “Victorian Trimmings” , but if you have the back issue of the magazine, the article and pictures start on page 76. Per the article, the owners are Christie and Garry Knesek who also have an antique shop in Crown Point called Old Green Shutters Antiques. Oh, and the 1st sentence of the article starts out “we had no plan whatsoever…”

I remember the first time I saw this garden, it was probably 5 0r so years ago and I was also traveling for work. We had taken a different route that time, and it took us by this house. I almost screamed ‘stop the car’ when I first saw the house and gardens, maybe I actually did. I know I wanted to jump out of the car and go talk to whoever was the gardener, but decided to stay ‘on the job’.

Now, whenever I go to Crown Point, I always try to talk whichever co-worker I am with in to taking a slight detour to see this lovely, inspiring, Victorian style garden. It’s just as nice as how it looks in the magazine, if not better!