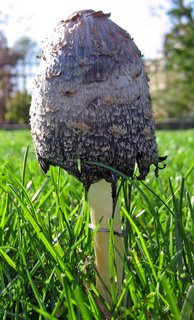 Did you ever wonder what goes on in your garden when your back is turned? Do you suspect there is a secret life out there that you don’t quite know about or understand?

I’ve written before about the mythical life of garden fairies and sprites. I suspect that at the end of the day in the twilight, just as the last bit of light from the day disappears, they begin to stir and prepare for a night of general mischief and fun. I try to provide a few plants I think the garden fairies will like, such as fairy lilies, so they’ll come and stay a bit. And I blame them when I lose things, like a pair of gardening gloves, out in the garden.

Then there is the whimsical life of little bunnies and mice, described by authors like Beatrix Potter who gave us fanciful ideas of hedgehogs named Mrs. Tiggy-winkle and rabbits with names like Benjamin Bunny. I envision all these little creatures dressed in worn, home-spun clothes, living in little nooks and crannies scattered about the garden, visiting one another for tea and treats, and talking about all kinds of ‘goings-on’ in the garden that I am unaware of. “Oh, look”, said the rabbit to the chipmunk, “she’s planted beans so in a few days when they sprout, we’ll have plenty to eat!”

Finally, there is the secret natural life of the garden, a world that I know some about but would like to learn a lot more about because I think it will make me a better gardener. The natural life includes everything from microscopic organisms eating through plant material to make rich compost up through earthworms, insects, and the relatively gigantic birds and bunnies. If I understood it better, I might be able to keep the darn rabbits from eating my beans!

And why the picture of the mushroom? It just appeared in my yard out of nowhere as most mushrooms do, but instead of mowing it down, I mowed around it. I thought it was a good halfway point, a wee bit of shelter, should a garden fairy attempt to cross the great expanse of lawn in my back yard.