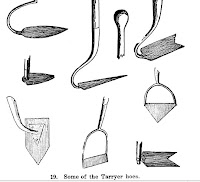 And I quote from Garden-Making: Suggestions for the Utilization of Home Grounds by Liberty Hyde Bailey (1898),

“Persons who follow the entertaining writings of Mr. A. B. Tarryer (a pseudonym for a well-known experimenter) in “American Garden,” a few years back, will recall the great variety of implements which he advised for the purpose of extirpating his hereditary foes, the weeds.”

That’s all it took to send me down yet another rabbit hole in search of the real identity for this A. B. Tarryer, the pseudonym for a well-known experimenter.

I glanced through most of the letters that were online, but found no obvious clues as to the identity of the mysterious A. B. Tarryer.

I took a side trip through the history of the village of Tarrytown, which is a real town on the Hudson River in New York, population currently around 11,000. I found out that Mark Twain briefly lived in Tarrytown around 1902, but I suspect he is not the mystery writer because he didn’t live there for very long, and his brief stay was well after the letters were written.

For awhile, I focused my search for A. B. Tarryer on General Howard Carroll and later on Captain William Casey, who both built large mansions in Tarrytown in the 1880’s. But I could find nothing substantial to connect them to the letters. In fact I admit I may well be off base even thinking that the letters have anything to do with the village.

Why this search? Because when one has a “great variety of implements which he advised for the purpose of extirpating his hereditary foes, the weeds”, it can only mean one thing…

It’s a bit much to get into, but suffice it to say that on the pages of American Gardening, Vol 11, I found this interesting drawing. 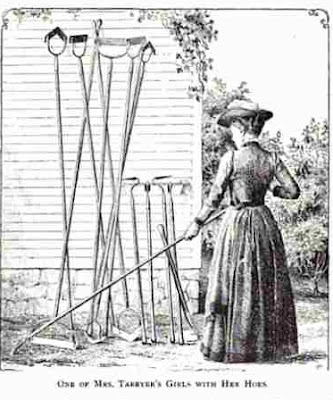 Apparently, it was actually Mrs. Tarryer who had a penchant for hoes and other implements used for extirpating our hereditary foes, the weeds.

Somewhere between here and there, I also read a reference in a Tarrytown Letter to someone named Loudon. Was this the real identity of the elusive A. B. Tarryer?

A quick search for Loudon lead me to The Horticulturist’s Rule-Book: A Compendium of Useful Information for Fruit-Growers, Truck-Gardeners, Florists and Others by L. H. Bailey (1889, Garden Publishing Co, New York).

See there ARE rules for horticulturists (fruit-growers, truck-gardeners, florists and others)!

In fact, an entire chapter of this book is devoted to Loudon’s Rules of Horticulture.

We should take particular note of Loudon’s Rule No. 7,

“Never pass a weed or an insect without pulling it up or taking it off unless time forbid.”

Keep that in mind this spring as you pass by weeds. Remember to stop and extirpate our hereditary foes, the weeds, fellow gardeners, unless time forbid.

Remember and be ready to recite Loudon’s Rule No. 7.

Oh, and if you know who A. B. Tarryer really was, please let me know.