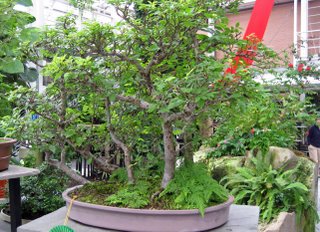 I’ve been thinking about bonsai for a long time and considering whether I should branch out into this type of “gardening”. Whenever there is a bonsai exhibit nearby I go to admire all the different types and dream about having some of my own bonsai trees. One of my favorite types are those that are in groups resembling little landscape scenes, like this one which I admired at the bonsai exhibit at White River Gardens on Sunday. 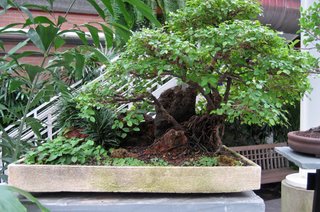 Here’s another example of a bonsai landscape. This one even has moneywort plant with it, which somehow they manage to keep under control! 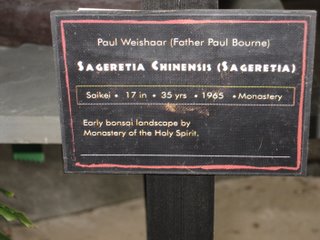 This is the sign for the bonsai which shows the owner and grower and the age of the plant, which in this case is 41 years! This one comes from a Cisterian monk, who seems to have been a well known bonsai grower. In fact, it appears that the monks at this monastery grow bonsai and sell supplies to help support themselves. I must investigate further.

Anyway, I digress… I was bound and determined that this time I would not just admire the bonsai, I would buy a tree to get started. Fortunately, the local bonsai club was selling some seedlings. They had three I was interested in, including Ginkgo (Ginkgo biloba), Japanese maple (Acer palmatum) and Trident Maple (Acer buergerianum).

I decided on the Trident Maple, pictured here because it has a lot of branching and they told me if you defoliate the tree in June, it will leaf out in again with smaller leaves.

Now that I have my seedling, my next step is to successfully overwinter it outside. I’ll do some further reading, web-surfing and research on bonsai over the winter, and then in the spring, I’ll hopefully know what my next step is. I think it will be to actually plant the seedling tree in a bonsai container. Then I’m going to need some help.

Does anyone have any advice on bonsai for me?