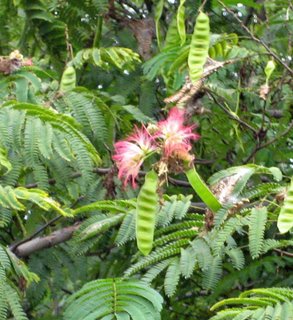 This is the last of the bloom on a Mimosa tree, Albizia julibrissin, which is hardy in zones 6 – 9.

No, I did not take a notion to leave town when the rain arrived and go south for a few days, find this tree and take pictures of it. This tree is actually in a yard around the corner from where my mom and sister live, in zone 5. I also drive by one every day on my way to work, also in zone 5

So, what’s up with these Mimosa trees? Are they hardy in zone 5? The answer is not really, but sometimes you can get one or more to make a go of it, especially if they are in a protected area or a microclimate that is even a few degrees warmer than other surrounding areas. These particular mimosas have been in this yard for several years, but I would guess they are not more than 10 or so feet high, and might be more appropriately described as large shrubs rather than trees. I think they occasionally do suffer some die back after particularly cold winters. We are probably fortunate that the tree isn’t all that vigorous here, as they are known to be a bit weedy and invasive in their own zones.

My dad was always trying to grow trees that were not known to be hardy in zone 5. Yes, he did try to grow a mimosa tree, digging one up from his parent’s zone 6a yard, where I assume they were a bit weedy and invasive, thus there were some to dig up. I think it only lived a year or two before dying back completely after one particularly cold winter.

His biggest success with an out of zone tree was actually with a Southern Magnolia, Magnolia grandiflora, which is only hardy to zone 7. The tree eventually died, and never got quite as big as they grow them “down south”, but it did reach about 10 feet and managed to even flower before succumbing to a typical Indiana winter. I know where someone else is growing one, as well, which I drive by a couple of times a week, so he wasn’t the only one trying some “zone busting” in the garden. In fact, they are even trying to breed a Southern Magnolia that will be hardy up into zone 5. That’s what I would get, if I were going to get one.

My older sister has the “zone busting” disease. She has a crape myrtle, Lagerstroemia sp., that they bought while on vacation and she is trying to grow it in zone 5. Normally, you don’t see them north of zone 6b, if even that far north. In her garden, I think the poor little myrtle has not gotten more than about 2 feet tall, even after several years.

Any one else having success with “zone busting” (that doesn’t involve hauling potted plants inside during the winter)?