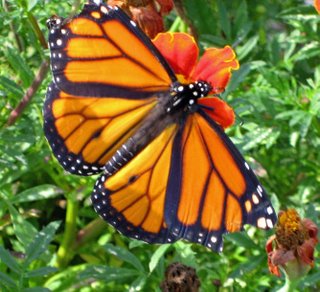 You will not catch me lamenting the changing of the seasons! I have always lived in a four season climate… traditional Spring, Summer, Autumn, and Winter. Not wet/dry. Not cold/hot. Four distinct seasons. Yes, the seasons do sometimes fade into one another and sometimes you wake up to find that yesterday was one season and today is altogether a different season. I may complain about the passing of time that the changing seasons remind us of, but I won’t complain about the seasonal changes. We are blessed to have them and often don’t realize it.

We had a contractor from Florida who came to work for us one February. He flew to Indianapolis on Mondays and returned to Florida on Thursdays. He commented one day in April that he could not believe the sudden change in the landscape. He had left on a Thursday and everything was gray and brown and dormant. He returned the following Monday and found greens and pinks and lilacs and all kinds of life. He said the change was remarkable. I was used to it and hadn’t thought about it much, but he was right, the change from winter to spring is remarkable.

And the change from summer to autumn also brings its own surprises. The landscape changes from the greens of summer to the golds, reds, and oranges of autumn. We’ll gripe a bit at first, because we see summer ending but then we’ll all soon be trying to one up each other with pictures of brightly colored trees and big pumpkins and other signs of fall. I notice more butterflies and cooler breezes in the fall. I love the sounds of the crickets and cicadas, singing their end of season ‘back to school’ songs. I love the promise of an upcoming period of rest.

Frankly, I’ll need the rest that winter brings. I don’t know how gardeners go on and on with the same climate, and really no chance to rest. No chance to re-group, to reflect, to study and ponder on what do next in the garden. Maybe they rest during a dry spell? I talked to a neighbor who moved from Arizona to here in December. He said that if people have grass in their yards, they have to water it 12 months out of the year. No rest? No way!

The picture above is of an actual butterfly in my garden, not one of these that I pictured before. It looks like its had a long season, with those tattered wings.

The pictures below are some signs of early autumn. Enjoy, there will be more! 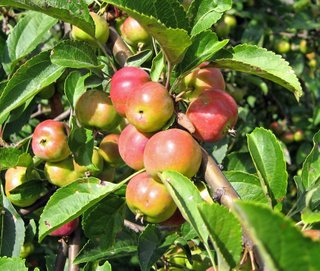 Crabapples in a neighbor’s tree. Martha would know what to do with these! 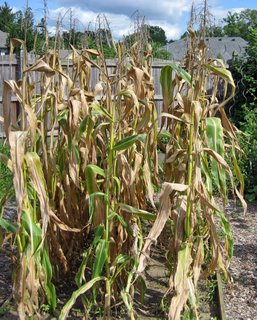 Corn in the garden. Check out that blue sky! Some of the bluest skies of the year are in the fall. And the rustling of the corn as the wind blows through it is definitely a sound of the season.