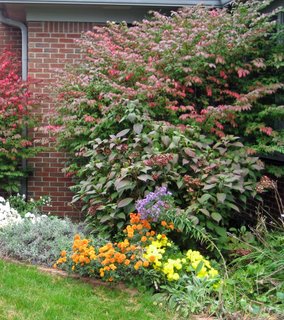 It is easy to be quite impressed with the Burning Bush (Euonymus alatus) at this time of year, when its best feature, its fall foliage, is displayed in full glory. At first glance, especially in its little one gallon container in the nursery, it appears to be a nice, basic shrub that provides brilliant red fall foliage. But there are some traits of this shrub that every gardener needs to be aware of before they rush out to get one or more for their own garden.

The Burning Bush is a bit over used, so maybe you were going to pass on it anyway? You can go to nearly any place where shrubs are sold, be that an upscale garden center or a big box store, and find Burning Bush for sale. They are often sold in one gallon containers, looking for all the world like a nice small shrub about a foot high, and listed as Euonymus alatus ‘Compacta’. Compacta? That means small to most people, even if they don’t claim to know any Latin, so they buy several and plant them some place where they want a nice little shrub that grows two or three feet in size.

They are then surprised to find that “compacta” in the Euonymus alatus world means it gets to 10 feet tall and nearly as wide versus 15 feet tall and 15 feet wide for the species. I don’t think people even look at the plant label, or maybe there is no label with the plant when they buy it. Regardless, now they have a shrub planted without enough room to grow. How do they solve that problem? Generally they solve it by shearing their shrub back each summer to keep it to a manageable size.

In shearing it back they then lose the shrub’s best features, the bright red fall color. If you look around at the balls and squares of shorn Burning Bush right now, you will find that most of them are a dark, maroon-ish red, and don’t really stand out much in the landscape. It is the leaves at the tips of the branches that have the best color, and that growth is all removed with shearing.

Plus, when people shear them back they shape them into little balls and squares and other forms that weren’t intended to be in a garden, unless it is a topiary garden. The only time I would shear them like that is if I were using them as a hedge, which I’ve seen done and it doesn’t look too bad. They are certainly a better choice for a hedge than common privet, Ligustrum sp., if you ask me.

The Burning Bush also needs a sunny location if it is to turn maximum red. In shady spots, I’ve seen the leaves turn a washed out pink or have no color at all. The pink is not too bad, actually, but it is certainly not the full brilliant red that you see when the shrub is in full sun.

Perhaps the most controversial characteristic of the Burning Bush is that they aren’t from around here. They are from someplace in Asia and they are now considered an invasive species in some areas because they have been found growing in naturalized and wild areas.

Should you be concerned about this and chop down the Burning Bush in your garden?

I don’t think so, unless of course you have underestimated its size and are cutting it back into balls or squares each year or you’ve chosen a site without enough sun. Or, per the article I’ve linked to above, you might consider removing yours if you’ve planted it near a woodland or other naturalized area. Then I’d consider apologizing to it and moving it on to the mulch pile and then going about finding a more suitable shrub. I would recommend perhaps a nice Viburnum or maybe a Fothergilla? I have some very nice Fothergilla that turns all kinds of colors in the fall, plus it flowers in the spring, whereas the flowers of the Burning Bush are inconspicuous and not even worth a mention. It really only draws attention to itself in the fall.

By the way, the picture above is of this shrub in my sister’s garden, taken just as it was starting to change color. I believe she’s done right by the Burning Bush. She planted it where it could get to its full size in a good sunny location, so it is a striking accent, especially in the fall. As a large shrub, it also provides shelter for birds. And as far as I know, she doesn’t have a bunch of Burning Bush growing up all over the yard, so I think she should leave it alone and enjoy it.

What do you think of the Burning Bush, Euonymus alatus ‘Compacta’?