I listened to the weather forecast on the way home. They used the word “crashing” to describe how the temperature will change late Thursday to early Friday. As in “crashing down from the mid 60’s to the low to mid 30’s”. That kind of alarmist reporting should really not be allowed. They should simply state the forecast. “Temperatures will change from highs in the 60’s to highs in the 30’s”. See, doesn’t that sound better, more normal? Like it happens all the time.

And we were warned to expect rain on Thursday with thunderstorms, maybe up to two inches of rain, and it will all turn to a winter mix on Friday. Nice.

And the good news in all this? I have the garden clean up done to the point that if I don’t do anything else until spring, it will be okay. And, I’ve finished putting up my outdoor Christmas lights.

I’ve included a photo below of a large evergreen that I put lights on. I’ll admit it is poor picture at best, that’s why it isn’t at the top of this post. (I need to review the camera instructions for tips on taking night pictures!)

But I’m proud of how I was able to put lights on it, without a ladder. When I first planted this Oriental spruce (Picea orientalis ‘Green Knight’), I could stand on the ground and put one string of lights on it and be done. Then it grew so that I had to use a ladder and 2 strands of lights. Then this year, I had to use a hook on a long pole to put the lights on the top of the tree, and I used 3 strands of lights. I probably could have used more lights but that’s all the instructions said to plug in together, and I like to follow the instructions when it comes to electrical things.

The other thing you can see in this picture is the forsythia (Gold Tide Forsythia, Forsythia x ‘Courtasol’). that is going to have to be taken out because it is crowding out the spruce. I wrote about that before in this post. Henry Mitchell, himself, speaking through one of his gardening columns, has convinced me it is the right thing to do… this spring… after we are done with wintry mixes… and once it has one more chance to bloom in all its glory. It will be so bright and yellow and cheerful when it does bloom that I will have to Remain Strong in my resolve to move it, as I know it will try to convince me to let it stay. It will probably bloom better and brighter than it ever has. I know it will. Remain Strong. 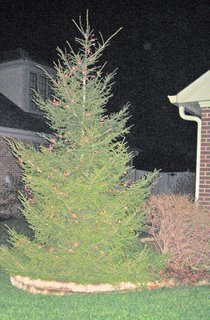