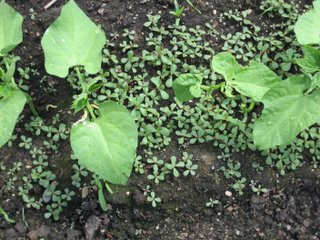 I uncovered my beans and corn today and said a little prayer that the rabbits would leave them alone or at the very least, if they do eat some of my crops, they will leave enough for me to get a decent harvest, so I have something to show for my time and effort.

Growing under the garden cloth, along with my beans and corn, is that darn weed purslane. Do rabbits bother to it eat? I don’t think so! It is the bane of my vegetable gardening experience and a source of constant annoyance and exasperation because it is nearly impossible to get rid of it. If you hoe it under, every tiny piece of stem will grow a new plant. If you pull it and leave even a microscopic cell or two, it seems, it will grow back! Yes, it is edible, but I have not personally tried it. A few years ago, I read “My Summer in the Garden” written by Charles Dudley Warner in 1870, and he had this to say about purslane, or as he called it “pusley”.

“I scarcely dare trust myself to speak of the weeds. They grow as if the devil is in them… The sort of weed that I most hate (if I can be said to hate anything which grows in my own garden) is the “pusley”, a fat, ground-clinging, spreading, greasy thing, and the most propagatious (it is not my fault if the word is not in the dictionary) plant I know… I am satisfied that it is useless to try to cultivate “pusley”. I set a little of it to one side, and give it some extra care. It did not thrive as well as that which I was fighting. The fact is, there is a spirit of moral perversity in the plant, which makes it grow the more, the more it is interfered with. I am satisfied with that. I doubt if any one has raised more “pusley” this year than I have; and my warfare with it has been continual. Neither of us has slept much. If you combat it, it will grow, to use an expression that will be understood by many, like the devil.”

I think that just about sums it up. At least purslane is not a new weed imported from a foreign country.

Charles Dudley Warner is also credited with the quote “What a man needs in gardening is a cast-iron back, with a hinge in it.”

I’ll need a hinge in my back as I get on my hands and knees to try to rid my garden of as much of this “pusley” as I can!