How many hand pruners do you have?

Continuing my “great household purge”, I headed out to the garage this morning and began sorting, cleaning, pitching, sweeping and otherwise re-organizing all the “stuff” out there.

Mid-way through, I discovered all these hand pruners dumped in a five-gallon plastic bucket.

I had at one time put a canvas organizer around the top of the bucket, one of those with all the pockets, but I didn’t use it very often. So the bucket ended up hanging from the pegboard, with the pruners in the bottom.

These are just some of the pruners I dated before I fell in love with my Felco pruner. Some of them look like we went together for a long time, others maybe had one or two trial dates in the garden and still looked brand new.

Some were name brand, though I’ve flipped them all so you can’t really see the brands, because this isn’t really about these pruners, it is more about my beloved Felco pruner.

Many of us are united in our love of Felco’s. My Felco pruner has never failed me, is easy to sharpen, and comes with a very handy clip-on holster. I’ve mentioned before that often when I have been out in the garden, I’ll come inside and hours later, realize that I still have the holster clipped to my jean’s pocket, with my Felco’s ready for a quick draw and cut, should an errant branch get in my way inside.

I also found another pruner while I was cleaning, hanging alone at the top of the pegboard. This one is sort of the “tough guy” of the pruners. Technically, it’s a shear.

Whatever the deal was, it seemed too good to pass up. It seemed like free money, a great investment in my garden. After looking at the catalog for a long time, because it is almost harder to spend a gift certificate that it is real money, I ordered a straw hat, a flower harvest basket and a Burgon and Ball garden shear.

The shear came in a beautiful box and was held closed with a metal band that looked like a flattened cigar band. I took that off, opened the shear up and immediately closed it and put the band back on. The shear was too big for my hands and the blades were very sharp and it just seemed like an accident waiting to happen. That shear was like that cool, tough guy that maybe you thought you wanted to date, but realized he was out a bit too dangerous.

I checked out the other pruners, and decided to keep the red-handled one because it is an anvil-type, and might be useful on larger branches. I took the rest to a charity organization. Perhaps a budding gardener will see them and find them useful? I can only hope.

Then I came in and looked at my Felco pruner, which yes, is kept inside most of the time when I’m not using it. I keep it in a basket by the door so I can find it when I go outside to the garden.

There’s still a lot of summer left, which means deadheading flowers and getting some of the shrubbery back under control. My love, the Felco’s, needs to be ready. I think later I’ll clean it up a bit and sharpen the blades. And maybe I’ll find some leather cleaner around here and use that on the holster… 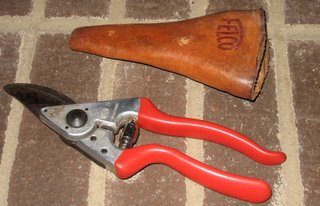 (No hoes were touched in the ‘great household purge’. This isn’t about giving up what you love, it’s about getting rid of the clutter, the useless-to-you junk, and giving what’s left a bit more room.)