My neighbors on each side each have a flowering pear tree (Pyrus calleryana) in their front yards. I’ve noticed significant differences in them, so I took pictures of them the other day. 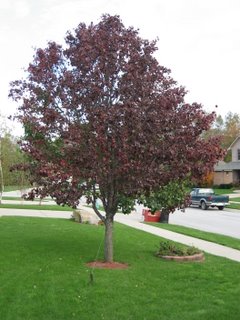 One has dark red foliage now and a more rounded shape. 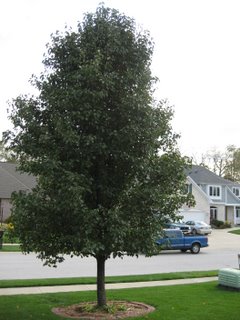 The other pear tree, which I helped select and plant, is the variety ‘Cleveland Select’ . It is still as green as can be. If it behaves the way it has in other years, the leaves will change colors slowly and drop all the way through Christmas. Then they just kind of blow away all winter.

The other odd thing about the neighbor’s unnamed variety of flowering pear tree is there are a couple of branches where the leaves haven’t changed colors at all. You can see them in the picture. Wonder why? Perhaps the tree is under some kind of stress? It leans a bit, so they’ve got a wire attached to it to try to pull it back upright. I think for this large of a tree, they won’t have too much success. It has had wires pulling on it for several years now, without much movement.

The other tree (‘Cleveland Select’) has a good shape tree shape with no pruning. It flowers nicely in the spring, though you don’t want to get too close, as pear trees are not known for their flower fragrance. Well, actually, they are known for their fragrance, but not in a good way. It’s kind of a funny, odd smell, but it only lasts for a few days.

It does make a difference which variety of pear tree you plant!