Some quick research on daylilies indicates that “since 1900 about 40,000 varieties have been named in the United States; 13,000 of them are still for sale”. (Click here for the source of that tidbit of info) .
Here are two varities of daylilies growing in my garden. 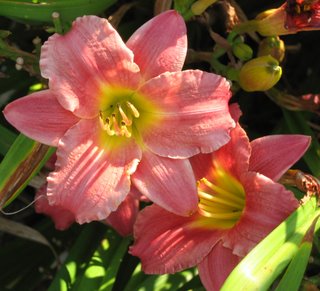 This first daylily is a variety called “Pardon Me” and please pardon me if you are tired of reading blogs about daylilies! 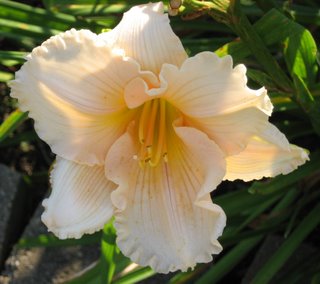 This lighter colored daylily is “Fairy Tale Pink”. I like the ruffled edges on this one.

My first daylilies were some unnamed varieties that I purchased from someone who had a field of daylilies they had hybridized themselves. I planted them at my first house/garden. Then four years later, when I decided to move to another house, I transplanted some of the daylilies to a couple of people’s gardens who were willing to “hold them over” for me until I got settled in my next house.

That worked out fairly well, and I did transplant the daylilies to my new house the next spring, but of course left some behind in the “holding” gardens. I stopped by one of those gardens a few weeks ago, and they still had some of those daylilies, on the edge of their vegetable garden, nearly 16 years later.

Funny thing is that of those original daylilies, I didn’t seem to get any moved from my second house to my now current house. It’s not because of distance because I didn’t move that far. I think it may have more to do with having moved out of that second house in January of that year and not moving into my new house until July. Hard to dig daylilies from the frozen ground!

Or maybe it is supreme procrastination on my part, knowing those other gardeners still have some of the daylilies and I could really get them if I wanted to or asked real nice? Or maybe it is a matter of space and if I want to provide that much room for daylilies with no name? Oh my, am I becoming one of those gardening snobs who will only have named varities of plants in their gardens? I certainly do not believe so! I actually have quite a few unnamed varities of plants growing around my gardens, many of them given to me by others. And, I am happy to have them because I love passalong plants.

Now I suddenly feel guilty for neglecting my first daylilies. I think I’d better go back and see if I can get some daylilies from those original plants, if after all this time, those who held them for me that first time, will still let me have some divisions of them.