My neice and nephews were playing in their backyard the other day and found some “creatures” which they tried to keep as new pets. They captured them, named them, played with them, and then asked their mother if I would want them for my garden.

I’ve put a picture of “them” below (the creatures, not the kids) so you can see what they offered to give me. I can hear them now. “I wonder if Aunt Carol will want these for her garden?” No. No, no, no.

What are they? They are gigantic slugs, at least gigantic for this area. I don’t know if you can tell from the picture, but some of those slugs are nearly 3 inches long. I’m not sure what will happen to them once the weather really gets cold and the ground freezes, but I am pretty sure they don’t migrate south. In fact, as I think about it, I know very little about the lifecycle of the slug. Where, oh, where do they overwinter? I assume under mulch and plant debris? Wouldn’t they just freeze solid above ground?

Regardless, I’m not adopting them as pets for the garden, so my neice and nephew let them go. I’m sure they “scurried off” as fast as a slug can go, after spending a few hours on a paper plate with three kids hanging over them, poking them, talking about them, and naming them.

And, by the way, the reason the kids were playing outside late in the afternoon was because we had a brief “Indian Summer” around here. High on Thursday – 69, and on Friday? 72. And what did I do? I worked. I could not even get out of work early enough to get home to do anything in the yard before dark. There ought to be laws or at least company policies that cover days like those!

“We hereby declare that if during November (or February or March), the temperature is above 65 and it is even partly sunny, all indoor work must cease and all meetings cancelled so that employees can attend to their gardens for a minimum of three hours prior to dusk.”

Here are the slugs … 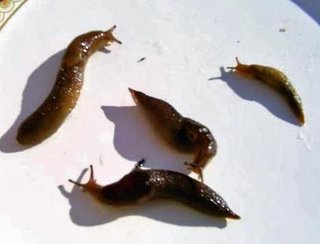 (See their little sluggy shadows? It really was a sunny day!)