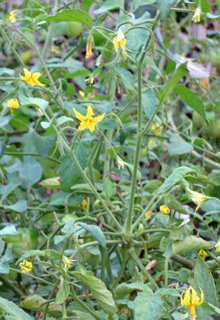 I am feeling smug and happy to have some peppers put away for winter stews, chili, and casseroles. I must have spent all of an hour or so cutting up and freezing about 20 bell peppers, a dozen Anaheim peppers, and a couple of dozen jalapeno peppers. And look at my cherry tomatoes pictured here, still putting out the blooms, which hopefully means I’ll be harvesting a few of these every day until frost hits them.

I am mostly a “harvest and eat it all right away” kind of gardener, planting just enough, but not too much, so that I won’t feel like I need to do a lot of canning and freezing to keep the produce from going to waste. Actually, I’ve never really canned anything myself. I’ve been around when my mom did a little bit of canning, but otherwise, I’ve not experienced much of it. What would my grandmother say about that? I’d think she would have quite a bit to say about it. Here is what she wrote regarding their gardening and canning in the 1930’s on a farm in southern Indiana:

“We always had a big garden and would can lots of vegetables. The boys would pick lots of blackberries and some years we would can up to 400 quarts. We always canned around 225 to 250 quarters of peaches as Carl had an uncle… who had a big orchard. We would go down and pick about 10 to 12 bushels of peaches. Next day my Mom and Dad would come out to the farm to help. Everyone would sit on the front porch. The younger boys would sort and wash peaches; older boys would use a peach peeler. One would push the peach onto 3 prongs to hold it, the other would turn a crank and a knife revolving at a faster speed would peel the peach in about 2 seconds. My Mom and Dad and Grandpa would cut peaches in halves to remove the seed and cut off any spots. Loretta (their hired girl) and I would take the peaches and cook in an open kettle about 15 minutes and can and it was a continuous process. By evening we would have about 125 to 150 quarts canned and lined up on the cupboards. It usually took two days to can 200 to 250 quarts. We gave Mom and Dad part of them.

Later when it was time to freeze corn in summer to put in the locker in Dale (Indiana), my father’s sister, Aunt Margaret from Cincinnati, would always plan her visit so she could be there to help cut off corn. Again Mom and Dad, Grandpa, and all the boys would each have their certain job to do and we would freeze about 50 to 60 quarts in a day. We canned fruits, vegetables, pickles, jellies, etc. all summer, then when winter came, we canned meats both pork and beef to last all summer so during a year we usually canned 2,500 quarts.

We baked bread twice a week, then rolls, coffee cakes on Saturday. On Friday, we always baked several cakes. All this on the old coal stove which really heated up the kitchen and whole house in summer.

I never will forget around 1935, one day Carl brought home a can of food from the store. I thought it was almost a disgrace to buy canned food. That was a sign of a lazy housewife. I took the empty can way over in a field and buried it so no one would see it around my house.”

Okay, I don’t feel so smug any more. I feel tired, and grateful that there is no shame in buying canned food any more. 2,500 quarts of food from the garden and farm every year!