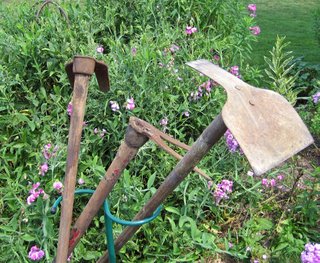 I sometimes fear the younger generation
will be deprived
of the pleasures of hoeing;
there is no knowing
how many souls have been formed by this
simple exercise.

How neatly the great weeds go under!
The blade chops the earth new.
Ignorant the wise boy who
has never rendered thus the world
fecunder.

Many thanks to my former next door neighbor (and still neighbor to my mom and sister) for sending me this poem on hoeing. He is the one who planted the trees that I wrote about early in July. His son heard the poem and sent it to him, and he sent it to me.

Many thanks to the colleague at work who helped me acquire these new-to-me old hoes to add to my hoe collection.

Many thanks that I have not been deprived of the pleasures of hoeing!