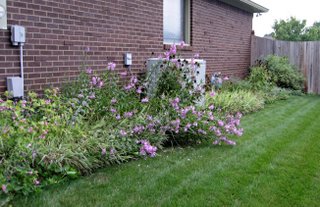 I had no plan for this garden by the side of my house. Some of you will say “and it looks like it”. Right now, it is dominated by Obedience Plant, Physostegia virginiana, which as you can see, I don’t spend a lot of (any) time staking up.

The reason there is no plan for this garden is because most of the plants along this side were given to me by other gardeners when I first moved into this house. I didn’t quite know what my plans were for the entire landscape at that time, so I decided to plant all of these passalong plants along this side of my house to hold them over. And I never got around to moving them.

The kerria is the “daughter” plant of a kerria on the other side of the fence. It sprouted up from the roots of the mother plant, and I left it alone.

Like I said, I had no plan, I just planted.

I certainly think it is better than my neighbor’s side garden shown below, which faces my No Plan garden. It’s a No Plant garden. 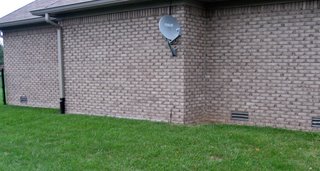 (To be fair to my current neighbors, they just moved in earlier in May, and are the fourth owners in 9 years. For whatever reason, no one who gardens has lived there, and so they never seemed to see the need to plant something along this side of their house. I have high hopes for the new neighbors, that they will finally plant something. I’ve seen them out looking at it, so I think they are at least thinking about it.)

I hope this shows gardeners who are waiting for the perfect garden plan that sometimes you just go for it, plant stuff and see what it looks like. Now, before any landscape designers/architects or garden designers freak out reading that little gem of advice, relax, there is also a time and a place for a garden/landscape plan.