I have a post lamp in my front yard which up until Saturday was in the grass by the front walk, with nothing around it. Not any more, now it is surrounded by a little flower bed. Here’s how I made my little flower bed… 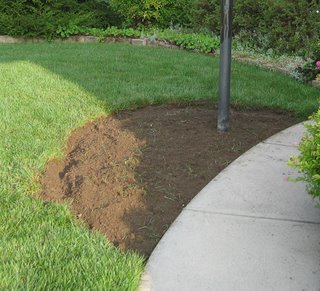 First, I removed all the sod. That’s the first picture. I actually started Friday night about an hour before it got dark, but didn’t have the presence of mind to take a ‘before’ picture showing the lamp post in the grass.

To dig the sod up, I used a half moon edging shovel to slice through the sod I planned to cut out, sort of like how you would pre-cut a pan of brownies. Then using my Japanese hand-digging hoe, I got down on my hands and knees and dug out the sod, a section at a time. I am grateful I can still get down on my hands and knees, and more importantly, get back up. I only use this method for removing sod from small beds. If am going to create a big flower bed, I use a roto-tiller to break through all the sod.

Underneath the sod, I found some very nice top soil, so I didn’t have to do anything to amend the soil. The reason there was good top soil there, and not a bunch clay and rocks, is because when my builder said 9 years ago “I’m going to have to bring in some fill dirt”, I asked him what he meant by “fill dirt”. Turns out he meant the stuff that gets dug up when someone digs a basement. Uh, no, we couldn’t have that! I could just imagine how horrible that would be to dig in. So, I told him to skip the “fill dirt” and bring in some top soil, and I explained what I meant by “top soil”. And thus it came to be that I have some nice top soil to plant in.

So, once I had removed the sod, and lightly hoed up the ground, I edged my new bed with some “cobble stone” pavers which I had left over from other projects. I have used this same type of paver as an edging along most of my shrub borders and flower beds. The 2nd picture shows the new bed all edged up. 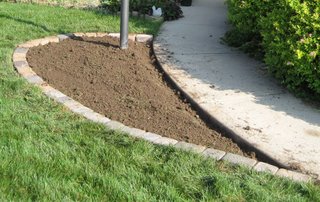 Finally, I got to do some planting. The fun part! I decided that I would not plant anything too permanent in this bed, to allow me an opportunity to put more “seasonal” plantings there, so I planted some Dendranthema grandiflorum (formerly known as Chrysanthemum) that I bought on Friday. I had purchased two nice big pots of these mums on a whim because they were only $2.99, and each pot had four plants in it. By dividing them up before I planted them, I ended up getting 8 plants for the price of 2! For six dollars! (When you get something that cheap, don’t you feel like you should say “six bucks!”)?

Yes, I know that mums are perennials, and technically, I should consider them ‘permanent’, but I may move them out later to make room for some tulip bulbs. And yes, I know technically tulips are ‘permanent’ too, but around here, they aren’t too reliable in coming back each year, so some people treat them as annuals.

Then after I mulched the entire bed, I gathered up 3 containers of plants from the back patio and set them around the post, along with a little statue of St. Fiacre, patron saint of gardeners. The largest pot, which has a purple-leaved sweet potato vine in it, along with some Cleome ‘Linde Armstrong’ (which is beyond its peak) helped to provide some height next to the lamp post. I thought the container of light green sedum provided a nice contrast to the purple leaves of the sweet potato vine. And the other container, which is partially hidden behind the sweet potato vine container, has some low, spreading coleus in it. 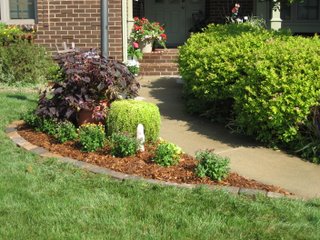 I think I’m all done with my little flower bed, at least for now, except I may add some pansies, if I find some I like, and maybe later I’ll add a pumpkin or two for fall decoration. Altogether, between Friday night and Saturday morning, I think it took me about 4 hours to create this little flower bed.

Now, I just need to figure out what to do with those spirea, Spirea bumalda ‘Lime Mound’, on the right, that are crowding out the sidewalk.