Neighbors don’t talk over the fence much anymore, do they?

If you lived next door to me, here’s what we would chat about this evening.

“Did you read that the water company around here wastes one billion gallons of treated water a year through leaky pipes and who knows what else?” I sure did read that article. In the meantime, they’ve asked us to go back to the odd-even system of watering because it is mighty hot and terribly dry around here and they just can’t keep up with the demand for water. My side of the street gets to water tomorrow.

“Are you going to try to water, or just give up this year?” I’m going to get up early and set the sprinklers where they’ll water mostly the trees and shrubs and the grape vines. The grapes are really starting to ripen, so I think getting them plenty of water right now is going to be key to a decent harvest. “You got any more of that zucchini out there in the garden?” Not so much now after that last big load I took into work. I still have some smaller squash that I held back for myself and I baked some zucchini pies last night to use up some of it. Some of the squash plants are starting to look a little spent, so I don’t know how much more I’ll get this year. But I’m not complaining because I had a great zucchini year.

“Hey, what’s that big bug that just flew by? A miniature hummingbird?” No, that’s a cicada killer. They look big and mean but they don’t usually sting people, because we are too big for them to waste their poison on. Remember that big one I saw last year actually attacking a cicada? That was sure something to see.

“You got some plans to use those fence pickets you got over there? You know they’ve got rules about fences around here.”

I sure do have some plans for these pickets. They are antique pickets that I got from my former neighbor. He got a bunch of them from the house where he grew up and built a little fence around his shed with them. 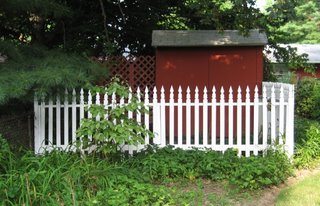 I think I’m going to mount the three pickets to make my own small section of fence, then use it as a trellis in the garden to grow a small vine on, maybe some sweet peas or a clematis. Do you have any other ideas on what I can do with these pickets?

And thus would go our little chat over the fence. Do you see anything else you’d like to ask about?