And now, the contents of my mystery package revealed. Here are my two new hoes from Rogue Hoe. I tried them out this evening, and I am impressed. The hoe heads are sharp, so it makes them easy to use. Plus, they are well-balanced. Both are keepers! 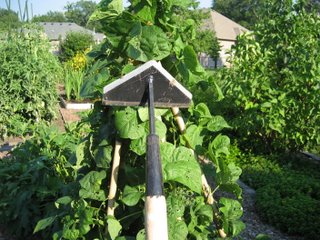 Scuffle Hoe – For the indecisive – do you push it or pull it? How about push and pull? 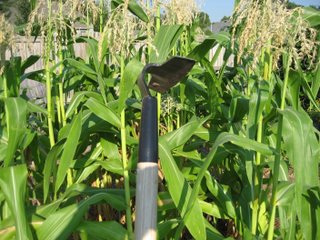 The Garden Hoe – A Gardener’s Best Friend, and A Weed’s Greatest Foe

If you would like to see all my hoes, click here. (I guess my bevy of hoes now qualifies as an actual collection. I’ve never considered myself much of a collector. I guess it just took some time for me to find something I really like, like gardening tools, to bring out the “collector” in me. )

Some other garden updates:

I’ve now eaten three big tomatoes from the garden. Two Brandywines, and one German Johnson. I really liked the German Johnson, it is more pink than red and as meaty a tomato as I have ever had. I’ll have to plant it again next year. Plus, as a bonus, the name reminds my of my country grandma. She’s not the grandma who wrote the diaries, but she worked just as hard if not harder, raising her family on a farm as my city grandma did raising her family in the big city.

I’m not getting many green beans. I think the bunnies are beating me to them, or the damage they did eating the tops of the plants has caused the beans to produce mostly foliage and very few blooms. Who knows?!

I am starting to see a few more ears form on my corn. I had previously written that my entire patch had only one ear. Now there are a few more ears, which I am happy to see. I just hope they got pollinated. I did send an email to Park Seed, and they wrote back that perhaps I had planted the corn plants too close together. That’s the only reason I can think of that might make sense.