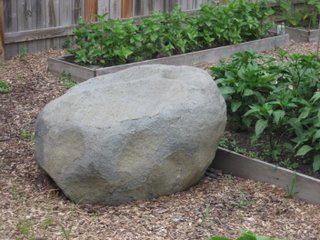 I’ve posted before about the large boulder in the back yard. I joked in that post that maybe it was a meteor or radioactive or something like that, instead of just being a great big boulder that they dug up when they dug my crawl space, and kindly left for me to figure out what I should do with it.

Well, now, as it turns out, this might be a special boulder.

A week or so ago, I got a phone call from someone at the Geological Service confirming my address and that I had this big boulder in my back yard. Then they started talking about seeing something on a satellite image of my yard. Apparently, they study those satellite images to find out more than we think, and noticed this boulder in my yard. What struck them, they said, was that there seemed to be some kind of energy coming from it. They asked if they could come and take a closer look, and I, of course, said yes.

I did ask them at that time if they thought the boulder was dangerous to be around, and they said “probably not”. I didn’t know how to take that, and so decided until they came to take a closer look, I was going to stay away from it!

They arrived the next day and brought with them some impressive looking equipment to take a closer look at the boulder. I was relieved that they were not wearing any protective gear or radioactive suits.

I took them back to the boulder and they proceeded to take measurements, tap it, photograph it, and, with my permission, chip off a few samples. I asked what they thought and with some excitement, they said they thought perhaps this WAS a meteor that had fallen from the sky, long before the land was farmed or developed, and that the force of the fall to Earth would have driven it down into the ground, where it lay buried until the excavator came along to dig my crawl space.

We talked about the neighbor also having some large boulders in their yard, and they were, of course, already aware of those, and that was to be their next stop. They felt like those boulders and mine might have come from the same meteor, that it would have more or less shattered on impact, sending pieces in all directions.

I also asked if I could take some pictures of them, and they said no, that there mission was still secret, and my posting pictures might compromise their investigation. That’s why I posted a picture of the boulder from last summer.

They said they think these boulders are from a meteoroid stream known as …. shoot I forget the name. I should have written it down. Anyway, I should hear the results of all of these tests around today, April 1st, also known as April Fooooools Day. If this turns out to be from a meteor, then it will be more exciting than the new plant I found in the garden last spring… I posted last year on April 1st about it.