I went to my sister’s house yesterday for a birthday party. The skies were blue, the grass was green and it was in the mid 70’s. In other words, it was a perfect day, and definitely a day to be outside.

Being one of the last to arrive, I assumed when I went into the house, everyone would already be outside on the deck and gazebo. Instead, I found everyone inside the house. All inside! I asked the group why no one was outside. My niece, who is 9, piped up and said “We are all afraid of the spiders”.

Spiders? My sister had mentioned some spiders hanging out around the gazebo and nearby sandbox, but I hadn’t given it too much thought. I certainly didn’t think it was keeping some of them from going outside.

So my sister went out with me to show me one of the spiders. I am warning you now that I put a picture of one of the spiders at the bottom of this post, so if you aren’t into big, ugly spiders, you can pass now and move on to something else. If you are undecided on if you want to get to the bottom to see the picture, I’ll just natter on here for a bit longer while you decide.

We think the spiders are big, and there seems to be quite a few of them. Most of them have taken up residence in two large Albert Spruces (Picea glauca ‘Conica’). These are two of the best looking Alberta Spruces that I have ever seen; they are over 20 years old and we’ve done almost nothing special to them. They’ve never even had red spider mites, which is a common problem with them.

Now they’ve got these great, big spiders living in them. Another sister and I talked about the spiders and agreed that if they were in our yard, we would have done something about them. However, I am not sure what that something would be. I would not want to spray them with a chemical and risk injury to the spruces. But life outside would be better without them!

My sister’s kids are even starting to use these spiders as a reason not to go out onto the deck. And these are not kids that generally run at the sight of any bugs. So, you know these are big, ugly, scary looking spiders.

As additional background information, next door, the neighbors had a creek that flowed through their property but they and some other neighbors talked the city into putting in gigantic plastic pipes underground and covering over the creek. In the process, they also cut down several very large maple trees, some of the biggest around. We all thought it was a shame and wonder if this is where the spiders came from. Perhaps the destruction of this last little bit of wilderness in the neighborhood forced them to find a new home, and that new home is in my sister’s yard?

So, I’ve gone on enough, by now you should be seeing the picture of one of the spiders that I posted below. Any idea what kind of spider it is? Is it a wolf spider? I have no desire to do all kinds of web searches to look at various spiders to try to figure out kind this one is. How would you get rid of them? Would you use a chemical? How about a strong spray of water to knock them of the tree? Would they just go back? Or would you leave them alone? Remember, I am showing you just one, keep in mind there are a whole bunch of them out there!

Oh, and the beautiful day was just too special to miss, so eventually most of us did end up outside on the gazebo, but I think all of us kept at least one eye on the spiders to make sure they stayed in the spruces and left us alone! 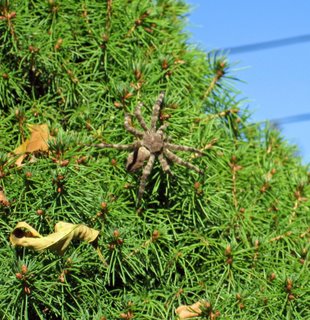