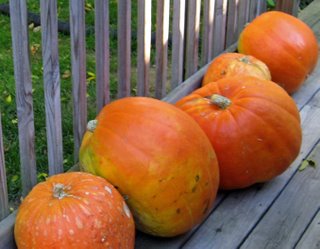 I don’t like TV shows or movies that are ‘purposefully’ scary and I’ll admit it. Growing up, I avoided watching shows like ‘The Twilight Zone’ and definitely tried to avoid movies like Halloween, though I did go and see it in college. Yes, occasionally I’ll get talked into watching what I consider to be a scary movie, but I don’t like doing so.

My idea of a good show to watch for Halloween is “It’s the Great Pumpkin, Charlie Brown”.

See the pictures of the pretty pumpkins? My sister and her husband grew them and said I’d be getting one IF they had one left over. But, I think the one left over rotted or something like that, so I’ll be using my old stand-by FAKE jack-0-lantern for Halloween.

But I disgress from the subject at hand…

Since I don’t like scary shows, I don’t know how it came to pass that I would watch an episode of the TV show Night Gallery from the early 1970’s and remember it even to this day. I think I watched it because it was about a gardener, and I couldn’t help myself. I recall that I was pretty spooked by it. Still today I can recall a specific line from this particular episode…

“Everything I plant grows”.

Anyone else remember this episode? It was called “Green Fingers”.

In this particular episode, there was a seemingly nice, old gardener who had a quaint little cottage and garden that she tended. She claimed she could get anything to grow, including kindling. Then a big, bad developer wanted her land and she refused to sell it to him, saying it was all she had and she wasn’t leaving it. Well, he was just as determined to get her land, so he had someone kill her. You heard her scream, but they didn’t actually show the murder. You just knew they had killed her.

But she fooled them. Before they got there to kill her, she cut off her thumb and planted it and it grew into guess what? Her! I think the episode ends showing her sitting in a rocking chair on her porch because…

“Everything I plant grows, even me”.