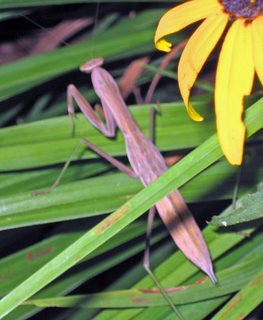 This morning I headed out to do some light deadheading and harvest more vegetables. The first thing I encountered was a very nice brown praying mantis. Good insect! Isn’t he cute in that picture? The praying mantises are good insects, because they eat other insects that aren’t so good for the plants, like those plant sap sucking aphids! Never kill a praying mantis, just leave it alone or if you must, coax it to move away from where you are.

I think all gardeners eventually learn not to squeal and run away when they see an insect. We have to, or gardening wouldn’t be much fun. Can you imagine, as often as you see an insect outside, screaming and running away each time? You wouldn’t get much done in the garden. Right now, I am refreshing my knowledge of insects by reading “Flies In The Face Of Fashion, Mites Make Rights, And Other Bugdacious Tales” by Tom Turpin. It’s a somewhat light hearted look at insects, with some fun stories and odd facts. Professor Turpin notes in his book that for every 1 pound of human beings on the planet, experts estimate there are 70 pounds of insects. We are clearly out numbered. Let’s learn to get along, if we can.

Anyway, back to today in the garden. After I did a little clean up out front, I headed out to my vegetable garden with my trusty trug. Here’s the run down of the harvest:

Tomatoes. I got a few more of those, plus a couple of dozen cherry tomatoes.
Peppers. Yep, can pretty much harvest some peppers every day if I want to now.
Cucumbers. Vines are looking a bit tattered, but I’m still getting a few cukes.
Eggplant. Still too small but at least they are forming, finally.

Corn. Then, I went over to the corn patch. As I had previously reported in this garden blog, I did not have good ear formation at the time that the corn was tasseling, so I was generally concerned that I would not get a good harvest. I also noted that based on when I planted the corn, I should harvest the first ears today, August 5th. Guess what I found today? Yes, one ear that looked ready to harvest. But before I saw that ear, I saw another problem. Corn smut!

Corn smut is a fungal disease that causes the corn kernels to turn grayish blue and grow about 10 times their normal size. It is disgusting looking, as you can see here. In some cultures, corn smut is considered a food delicacy. But not in my food culture. I just can’t imagine eating it. I pulled off about six infected ears, wrapped them up in a plastic grocery bag and threw the bag in the trash. I didn’t want to throw them in the compost bins, because the fungal spores would overwinter, and I would have the same problem next year if I use that compost in any of my raised beds. Regardless, I’ll probably end up with corn smut again, as there is pretty much nothing one can do to prevent it if the conditions are right for it to grow. I will definitely not plant corn in these same raised beds next summer, if I grow corn at all. (I always try to rotate crops each year, anyway.)

However, the reason the title of this post includes “good corn” is because I went ahead and harvested that one ear of corn. It wasn’t the best looking ear of corn I’d ever seen or the largest. But I ate it. I boiled it in water for two minutes, because my aunt said that’s all the longer she and my grandmother cooked corn on the cob, so I figured that I should do the same. It was good and very sweet. I would guess that it took less then fifteen minutes for me to harvest, cook, and eat that ear of corn.

Now some people might read this and wonder why I didn’t offer to share my corn. There wasn’t enough to share! I invoked the vegetable gardening rule which says if there is only enough harvest for one person to eat, the GARDENER who did all the work gets first dibs. Others may question why I tried to grow corn in the first place. If you’ve every tasted really good fresh sweet corn, you wouldn’t question why it is important to at least try to grown your own corn. That’s another gardening rule… always try!

Hopefully, I may still get an ear or two out of this block of corn in the next week or so. I also have a second block of corn which is now tasseling. I’ve refrained from looking too closely at it to predict the harvest, as I did with the first block of corn, so I don’t really know what I’ll get. Hopefully, not more corn smut!

In the meantime, if I am to eat more corn from this planting, I may need a recipe for corn smut!

(Picture of my entire sweet corn harvest so far. Variety is Mirai)