Happy First Day of Spring to all the clumsy big feet people, or CBF’s as we like to call all the gardeners.

We call all you gardeners CBF’s because it seems that whenever you step in the garden, no matter how careful you are, you accidentally step on a plant you shouldn’t have, then you yell “Frass!” or something worse, and we laugh.

That is we laugh unless you’ve almost stepped on one of us garden fairies, then we are the ones who yell “Frass“, but never anything worse than that because we are garden fairies and we do not curse as a general rule.

Anyway, we garden fairies did not take over this blog today to talk about CBF’s or wax poetic about the first day of spring after that ginormous full moon last night. Really, we have matters much more important than that to write about.

Do you see that straight line of Iris reticulata ‘Mrs. Beatrix Stanley’? Goodness, what is that all about?

We garden fairies thought there were rules about planting, or should we say not planting, in straight lines like that? We were all puzzled over it because the Irises in the front garden are scattered about and not in a straight line. Then we realized that these are Irises that Carol rescued last spring when the garden re-design started. She moved them back to the vegetable garden for safe keeping, the way we garden fairies moved back there for safe keeping, too.  She must have a rule about planting everything in the vegetable garden in a straight line.

We garden fairies get all confused about rules, guidelines, and traditions in gardening. Just when we think something is a “rule”, we notice someone breaks it and then it is called a “guideline”.

Or we think something is a “guideline” and it turns out it is really a “tradition”.

All this is making us garden fairies think that the only rule that’s worth anything is the tradition of drinking spirits every night. And the guideline of stopping our drinking an hour before dawn so we can find our way home before daylight really ought to be a rule because we garden fairies can end up in some awkward situations if we don’t.

If we garden fairies are confused by all these rules, traditions, and guidelines, we can only imagine how confusing it all is to new gardeners!

Believe it or not, Carol had a tradition of planting peas on St. Patrick’s Day, which we thought was a rule, but was more like a guideline. We say “had” because she didn’t plant them this year. She has to wait until she’s re-done the vegetable garden raised beds before she can plant anything, because they are a mess.

Just look at this! 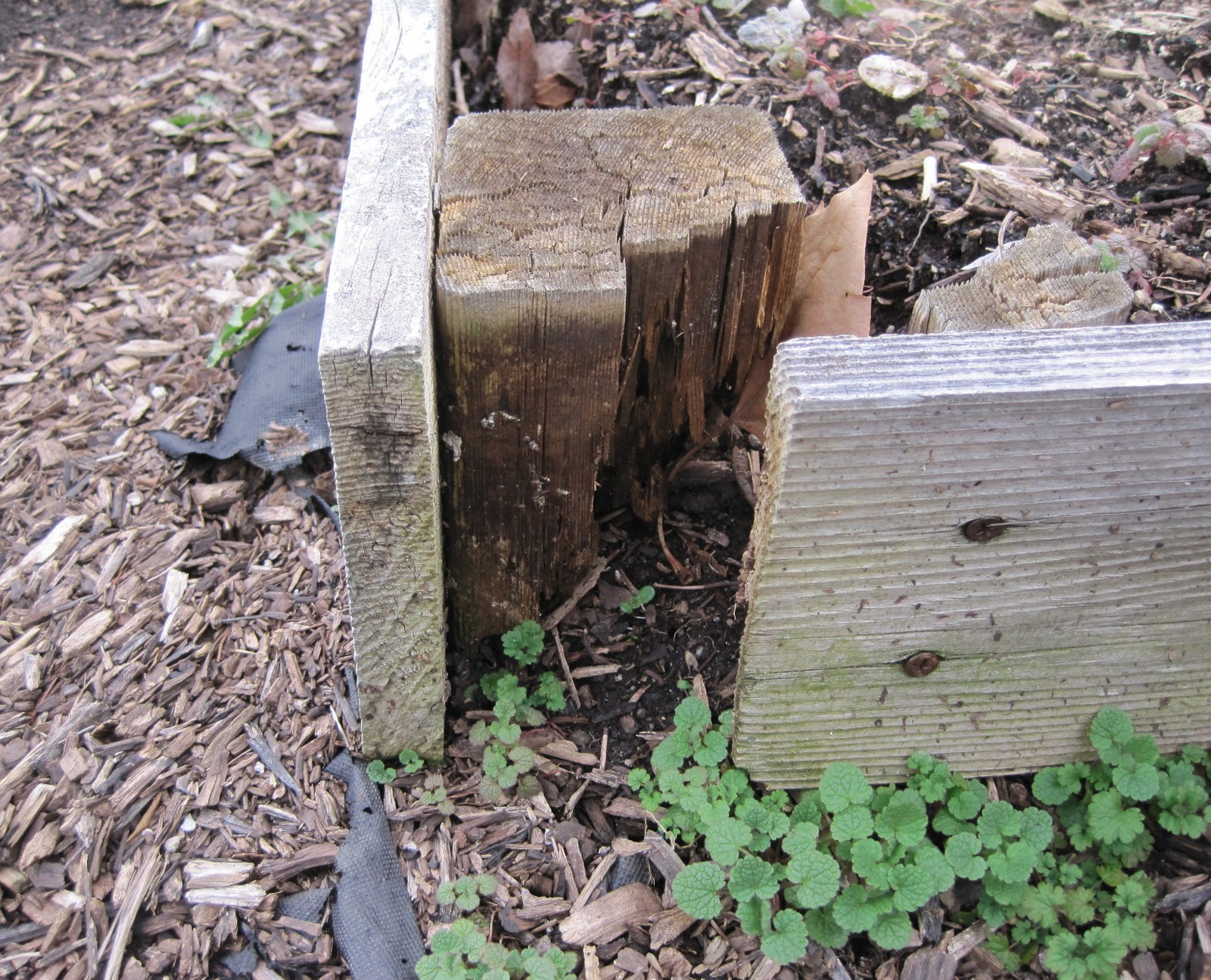 And there are plenty of other pictures like this one.

But she hasn’t redone the vegetable garden yet because of the rule of not working the soil when it is wet. It keeps raining. In fact, it rained again some this morning and might rain some more this afternoon. But that shouldn’t stop her from planting pansies and violas out front, which is also a tradition, and it shouldn’t stop her from getting her tomatoes and peppers started inside now.

All this change and abrupt canceling of traditions is kind of unsettling to us garden fairies. We can only wonder how Carol is handling it. After all, she seems to like love all her rules, traditions, and guidelines. But never you all fear, gentle gardening readers and others, being good garden fairies, for the most part, we have taken it upon ourselves to watch her closely though this season and have alerted Dr. Hortfreud to be ready at a moment’s notice.

Submitted by:
Thorn Goblinfly
Chief Scribe for the Garden Fairies at May Dreams Gardens

P.S. We garden fairies just took a peek at Carol’s calendar and it appears the garden designer is visiting tomorrow evening. We are excited to see what this means for the garden this spring!