From the space station, or the moon or somewhere up there, you can see my raised bed vegetable garden with its paths (compliments of Google Earth).

When I take pictures of the garden from ground level, it doesn’t really show how the beds are laid out and you can’t see all the paths.

Good paths are key to a raised bed garden like this.

The paths should be wide enough to accommodate a wheelbarrow and allow you to walk all the way around each raised bed. And they should be covered with mulch or stone or some material that is easy to walk on and keeps the path from getting muddy after it rains. These are clearly utilitarian paths designed to fill the space between the raised beds.

The second kind of path in my garden are shortcuts.

I just added some of these last summer in a few places where I was regularly cutting across a flower bed, rather than walking all the way around it. I want these paths to blend in a bit and not be obvious to others. I think once the plants grow up around them, they will be more hidden. These are my secret shortcuts.

The third kind of path in my garden is the kind of path that should gently guide the visitor to one section or another of the garden. 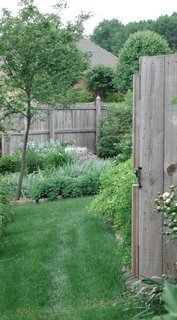 I really only one have of these. As you enter from one side gate, it is pretty clear that you should follow the path and turn to the right, which should take you to the patio area.

But once you get to the patio, my entire yard is exposed in one view. There isn’t much to invite you to go in one direction or another to see what else is there. It’s all there, right before your very eyes.

I think this “all the garden in one big view” is a problem prevalent in a lot of suburban lots which start out as flat expanses of lawn. It might seem like a dream to have such a blank canvas, but it takes a good design, and a pile of money, to turn such a lot into a garden, the kind of garden with paths and views and surprises around the corner. There are no corners! There are no paths! There are no surprises! It is truly a blank slate.

So how would you approach this blank canvas? Would you start with the paths first and then build the beds around those, or would you add various garden beds and let the paths form between them?

Perhaps others who’ve been thinking about paths and walkways as part of the November Garden Bloggers’ Design Workshop hosted by Gardening Gone Wild have some advice to offer?