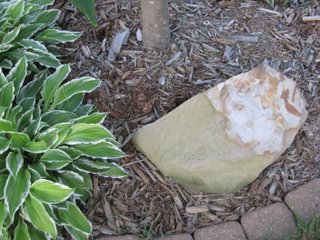 I have a large flat topped foundation stone under one of my trees. It’s from “the old homeplace”, which is where the ancestors of my paternal grandfather first lived in southern Indiana. This stone was once part of the foundation for their house. I got it from one of my uncles who used these foundation stones in his landscape, and graciously gave me one to have in my garden.

When we were kids and visited the family farm, it was a big deal to walk across the fields to the actual “old homeplace”, which was in the woods, abandoned pretty much, but still standing. We didn’t go in the house, which always looked like one good wind would knock it down. We’d walk around the house and my aunt or an older cousin would point out a second story window and tell us the story of how our great-grandfather’s sister climbed down a ladder from that window, and ran off in a horse and buggy to elope with her boyfriend. We never did find out if there was a problem with the boyfriend or why they felt they had to run off to get married, but we enjoyed the story!

If I had visited the house when I was older, I would have also looked for some plants to take from the site to add to my own garden. As a kid, I didn’t have quite the same obsession with acquiring starts from plants that were either grown in a relative’s or ancestor’s garden or were the same species that they would have grown. That’s a more recent character development.

So, even though I didn’t collect any plants from the location, at least I have the stone to put with some plants that might have been the type they would have had around their house. And the stone has a story behind it.

I like gardens that have pieces in it like this one that have some meaning to the gardener or a history behind them which is other than “I bought this at the fill-in-the-blank nursery and it is called ‘fancy botanical name’. I like when you visit a garden and the person who planted it has stories about each plant or ornament.

When I visited my uncle’s gardens, I was very impressed with how he used all these foundation stones from “the old homeplace”. I don’t know how he did it, but he managed to move them to his house without scratching any of the stones, and several of them are quite large. It made his garden a very special place.

Stay tuned for more stories from the garden.