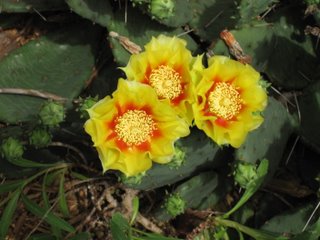 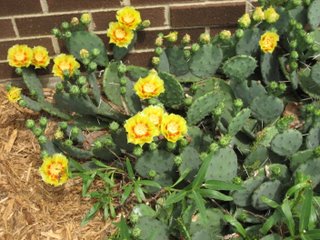 Cactus in my midwestern zone 5 garden. This is a prickly pear cactus, probably Opuntia humifusa or something close to that. These pictures are from when it was blooming in June. I did some research on it, and found out that one of it’s common names is “Devil’s Tongue”. I can believe that for a name. Another common name is “Prickly Pear” cactus

A guy at work gave me this plant about 8 or 9 years ago. He said he always used pliers to handle it and he had some growing near his swimming pool. I can’t believe he had it near where people might walk or step in their bare feet!

I once tried to handle it with thick leather garden gloves and the little pricklies all came through the gloves and into my hands. I tried to wash those gloves and could not get the pricklies out of them, so I had to toss them out. And I was picking those pricklies out of my hands for days. Another time, I was trimming some nearby lilacs and accidently backed into the cactus “just barely” and ended up with some pricklies in my ankle, through my socks. Ouch!

I planted these cactus in a little spot up by the side of the house where I am pretty sure no one will walk through them or touch them. I treat this is a “novelty plant” in my garden, just to surprise people and to show that cactus grows in more places than the desert.

Someone could also use this plant as the center piece of a theme garden planted with all types of plants that have the common name of Devil-something-or-other. (There’s a future research project… to compile a list of such plants for such a garden.) I’m sure it would be an interesting garden of thorny and dangerous looking plants, because those are the type that generally end up with common names that include the word “devil”.

I’ve also never seen this cactus at a garden center. I guess you just have to know someone who has some to get a start of it. Without too much effort, I’ve kept this contained to this one spot, and so at least for me, it is not invasive. But, when I originally posted this picture, I got this comment from a reader (Alice) in Australia:

So, it CAN be invasive in some places.

And, yes, it does survive through the winter here in Indiana.

(This is another post from my “hoe collection” blog. I am gradually moving over non-hoe related posts from that blog to here, so that all that is left on the other blog are the hoes.)