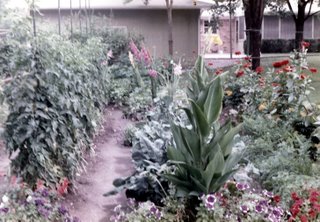 The picture above is a scanned photo of my Dad’s garden and if you will indulge me a bit, I’d like to tell you about his garden.

Every year, Dad planted a vegetable garden. He worked the soil in his garden through the years until it was like chocolate cake mix, rich and dark and full of organic matter. There were a couple of ways he got all of that organic matter, most of which involved me and my siblings doing some “hard labor” with a rake in hand. Every fall, we raked nearly every leaf in the yard (and there were a lot of leaves), piled them on large drop cloths and drug them to the garden where he would chop them up and till them under with a roto-tiller.

The result of all of this soil amending was a very lush, productive vegetable garden. He had tomato plants that regularly grew up to 8 feet tall. It got to the point that he had to use metal fence posts for stakes, buried at least two feet into the ground. He also put cross bars between the posts for added support to keep the tomato plants from pulling them down.
And to ensure he had the best chance of harvesting the 1st tomato of the season, he started his tomato plants from seed several months in advance of the frost free date. Getting that first tomato was a source of much pride and a reason to brag amongst the other gardening neighbors!

The rest of the garden included lettuce, peas, onions, cabbage and broccoli, which he planted as early as he could get out and roto-till the garden, and beans, cucumbers, zucchini squash, peppers, and eggplants. For good measure, he added flowers here and there, including zinnias, petunias, cannas, marigolds and dahlias. An occasionally he would try a new crop, like kohlrabi.

He planted the garden in long rows, and sometimes put old wooden boards in the paths between the rows so he could walk through the garden even after it rained. And then around the plants he would dump the lawn clippings, which helped keep down the weeds and retain moisture. The grass clippings also added more organic matter to the soil. I never remember the garden getting weedy or out of control. I remember it as a well-maintained jungle of lush plant growth.
He always came home from work for lunch, and after eating, he would spend a few minutes walking through the garden before returning to his office. I suppose he was making a mental list of what he would do in the garden that evening and just making sure all was good in the garden he had created.

Dad passed away in the spring of 1987. That year, we over-seeded the garden with some flower seeds and then later sowed it with grass seed. We knew that none of us would have time to tend a garden there or help Mom do so.

But then in 2000, my youngest sister and her husband bought the house and replanted the vegetable garden in the same place where Dad had his garden, which is the only sunny spot in the whole yard. They have their kids out there in the spring helping them plant their garden, in the same way that Dad had us help him plant his garden.
So, the garden lives again, and produces for them the way it did for Dad. They could not believe that first year how big their pepper plants were. I told them it was all in the soil and to thank Dad for that. They’ve added their own touches to the garden, including corn, pumpkins and potatoes. They also don’t grow many tomatoes, since my sister doesn’t like them. And for some reason, they run their rows in the opposite direction that Dad did.

But it is nice to see that all that good garden soil, the result of all that work our Dad did, is once again being used for a vegetable garden and that several of us have carried on the tradition, each in our own way, of having a vegetable garden and working to make our own soil a little richer.
I’m sure he would have liked that!