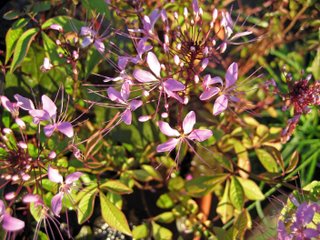 This is Cleome ‘Linde Armstrong’, one of the Athens Select plants bred to do well in hot weather.

I’ve been reading some “disparaging remarks” about cleome on several blogs , remarks about it having an unpleasant smell and self-sowing all over the place. My apologies to those who wrote about cleome that I don’t have the time or memory to find those blogs and link them here. (If you were one of those bloggers, send me a comment, and I’ll update the post with a link.)

I also have some of the “regular” cleome, Cleome hasslerana, growing here and there throughout the garden where it sowed itself. I can take the self sowing of cleome because it’s not as out of control as some self-sowers that I have unleashed upon my garden in the past. (Tansy and variegated sweet artemesia to name two, if you must know, but don’t tell anyone. It is a bit embarrasing to have done that to my garden).

Smell? I haven’t noticed a bad smell coming from the cleome but I haven’t stuck my nose right up into the flowers, maybe because I know it might not smell so good?

‘Linde Armstrong’ has done well growing in a container on my patio with a dark purple sweet potato vine. In fact, the flowers are actually more purple than are shown in this picture, and the foliage has a bronze cast to it. (Hmmm the description on the Athens Select website doesn’t mention this characteristic of the foliage, wonder what’s going on with mine? Anyway, you should go to their website to read about this variety. They do a great job of describing it in such a way that you, too, will want it for your own!)

The plant has stayed around one foot tall by one foot wide. ‘Linde’ might also self sow, but that would be alright with me. It’s a nice plant!