With an online garden blog, I can easily portray an image of my garden that is like paradise. Pretty flowers, green grass, interesting insects, serene sunsets, soft rains, and more vegetables than can be eaten in a season.

But real gardeners aren’t fooled. So I also include glimpses of the opposite of paradise by sharing information about topics like invasive plants, stinging wasps, corn diseases, and ravenous rabbits. Earlier this summer on my companion picture blog, I posted pictures of some shrubby St. John’s Wort in less than perfect condition. Yes, the shrubs weren’t perfect, but I thought they still looked all right from the street, and with some serious pruning next spring, I could rejuvenate these nearly 9 year old shrubs so I could enjoy them for a few more years.

Here’s that post for those who haven’t seen it. (I’ve copied it here and will delete it from the other blog, as part of my grand plan to combine the two blogs and leave the other blog for just the hoe collection.) Skip to the bottom for the part about bagworms 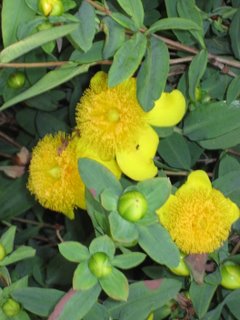 I like the bright yellow flowers on my shrubby St. John’s Wort, Hypericum frondosum ‘Sunburst’. As the flowers fade, they leave chocolate-ly colored seed pods, and when the leaves drop off in the fall, I can see the peeling bark of the stems, which adds that valuable winter interest we so covet when we live where there is truly “winter”. The foliage is a dusty blue green, and for the most part the shrub is well-shaped without a lot of pruning.

However, there is a dark side to this shrub, that I feel obligated to reveal before anyone rushes out to get one because of the great flowers and peeling bark.

One part of the dark side is that the Japanese beetles love them. I call these my “indicator shrubs” for Japanese beetles, as this is the first plant I’ll find them on in late June. I’ve taken a picture of a few of them munching on one of the flowers a while back. “Fortunately”, I didn’t see too many beetles munching on them this year.

These shrubs kept their shape and looked great for 8 years, but then this year, without warning, there was quite a bit of die back in the shrubs. That’s the other picture below. It doesn’t look very nice, does it? I don’t know if this is due to age or the winter we had (which wasn’t one of the worst of the past 8 years).

My plan is to cut these shrubs back “hard” in early spring and see if they come out of it. The die back may just be an age thing, and the pruning might rejuvenate them. Does anyone have any other suggestions?

Overall, I put this shrub on my list of “recommended shrubs” but with a few cautions because of the beetles and the dieback I’ve experienced with my older shrubs. But I still think this shrub is worth having because of the flowers in mid-summer, the light blue-green foliage, and the interesting bark. 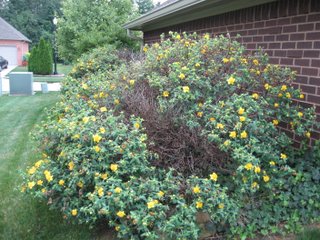 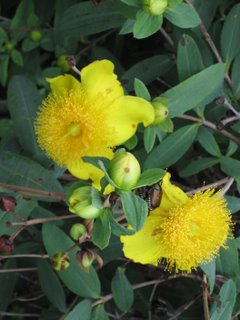 Now, the really bad news. I found bagworms all over these shrubs a few weeks ago. Yes, bagworms attacked these shrubs in their weakened state, and now they look very pathetic and quite defoliated. They look so bad that I refuse to post a picture of them. It would be like taking someone’s picture when they were sick in a hospital!

I spent an hour or so one evening hand picking all the bagworms off. That’s the best way to control them, just pick them off and put them in the trash. When there are just a few bagworms, I just pick them off, throw them down to the ground and stomp them with me foot. Actually it is more of a stomp and twist, twist, twist with my foot to make sure they are dead, deader, deadest. I don’t know what moth these bagworms might have become, I don’t really care. I just wanted them gone.

I’ll keep an eye on these shrubs, stick with my plan to prune them way back in early spring, and let you know how they turn out.