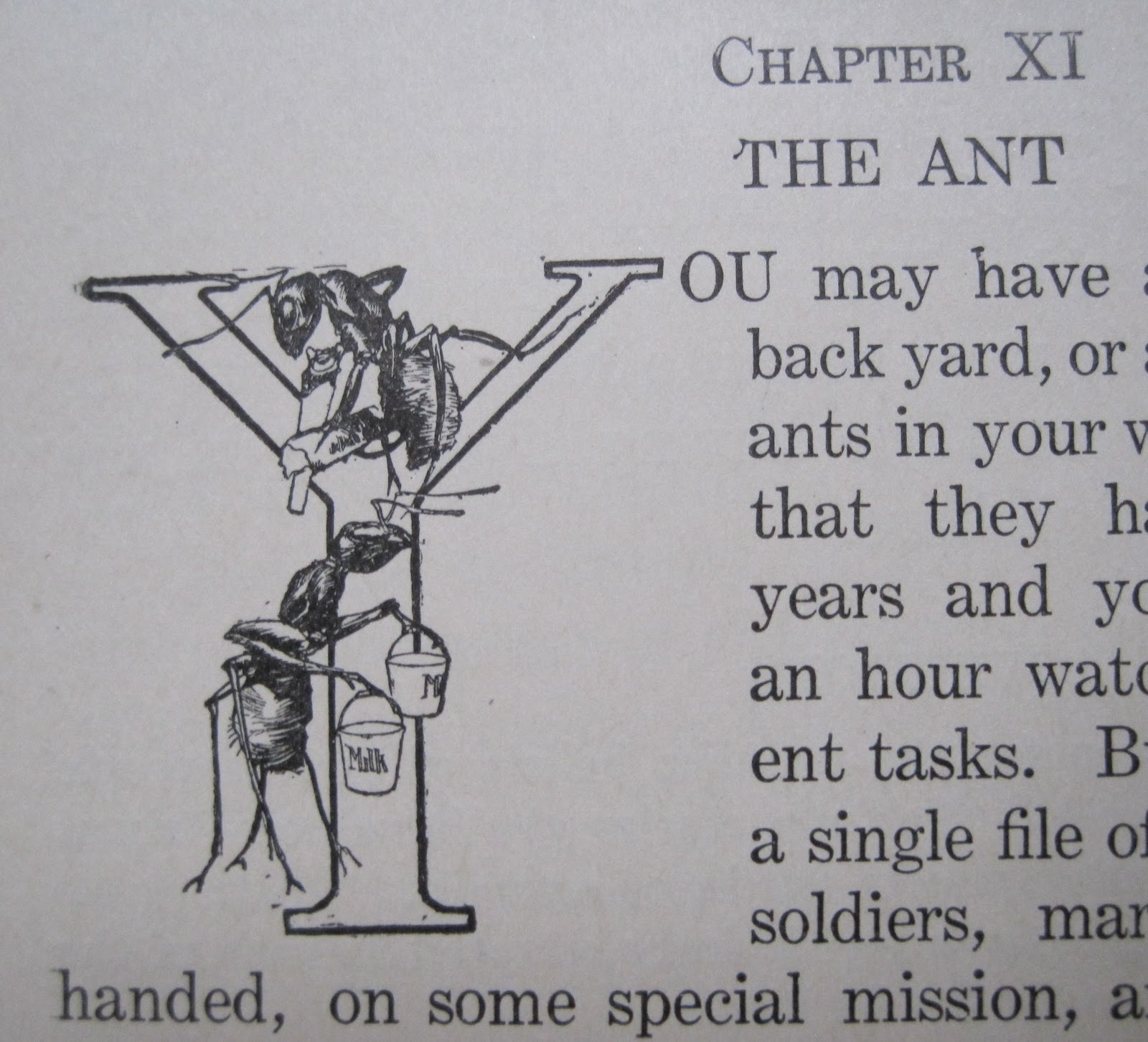 But sometimes spring’s beginning is announced by tiny brown ants that show up in my kitchen. “Where are the crumbs?”

I’ve never kept track of when the ants arrive each year, like I keep track of blooms, but I suspect the ants will be along in a few weeks.

Now, if one is going to have insect guests in their home early in the spring time, ants aren’t too bad to have. According to William Atherton DuPuy in “Our Insect Friends and Foes” (1925), ants are clean. (Yes, that book again.)

DuPuy wrote quite a bit about the ants’ personal cleanliness and grooming and then went on to note,

“This cleanliness applies likewise to the home. Never a particle of anything unclean is to be found about the ant community. Drop anything messy in an ant hill and the sanitary squad is immediately called out to cart it away. Ant homes underground have little ventilation and are without the cleansing influence of the sun. They might easily become litters of filth, musty and unsanitary. They would if infinite care were not exercised. But these housekeepers are immaculate. Every suggestion of soil is given prompt attention. These creatures seem to know by instinct these lessons of sanitation which many human communities have not yet learned. Or, perhaps, those that did not keep clean have long since ceased to exist through the attacks of parasites and fungi.”

This weekend the priest at church told a story about an ant.

The condensed version of the tale is that an ant left home, decided to return, and got run over by a train on the railroad tracks on his way back, thus losing his tail. When he got home and his mother asked him what happened to his tail, he realized he had lost it and went running back to find it. As he crossed the railroad tracks again, another train came by and, splat, he lost his head.

The moral of the story turned out to be, “Don’t lose your head looking for your tail”.

People were visibly shaking with silent laughter when the priest delivered the punch line, but somehow it all tied in with readings for the day.

It also made me continue to think about ants, which lead me to think about bloodroot flowers, and how ants are involved in dispersing their seeds, and the seeds of other plants, too, in a process called myrmecochory. It’s ingenious on the part of the plants to make their seeds attractive to the ants so they’ll cart them off, where they can germinate away from the mother plant, thus spreading the range of the plants, one ant at a time.

Of course, then I started to think about the big black ants that I see crawling all over the peony buds in late spring. I like to think they are tickling open those big fat buds, but that’s a little fanciful and hardly the case. The ants are there for the big drops of nectar and while there, probably eat a few “bad” bugs, too. (It is the garden fairies who pry open those big buds of the peonies. This line inserted by the garden fairies.)

Ants can, of course, be a big pest and nuisance about the house and garden, causing damage if left unchecked in some areas.   And there is nothing worse than to thrust your trowel into the ground and realize, as ants are immediately swarming onto your hand and up your arm, that you’ve just disturbed a big ant hill.

But they are still fascinating to watch.

I will finish off this trail of ant thoughts, with one more musing, a question, posed by DuPuy at the end of his chapter on ants.

“Why do they (ants) merit the praise bestowed upon them in the Biblical saying, “Go to the ant, thou sluggard; consider her ways and be wise.”