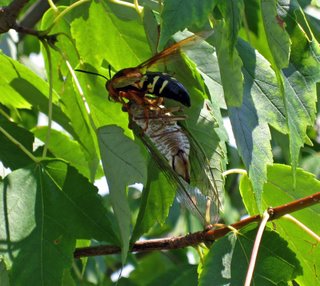 And there in a red maple tree, we saw a Cicada Killer attacking a dog day cicada. Live, up close, right there it was. I ran for my camera and of course took a picture or two. I had to get pretty close to it to get good pictures. Aren’t I brave? See what I will do for a good picture in the garden these high summer blogging days!

I did some looking up in my new book on insects by Tom Turpin, and he tells the whole gruesome story of just what happens when a cicada killer attacks a dog day cicada. It goes somewhat like this…

The cicada killer, which is a very large wasp, digs a hole in the ground, six inches deep or so, and puts the paralyzed cicada at the bottom of the hole. She then lays an egg on top of each cicada and when the egg hatches in a few days, the larvae feed on the paralyzed cicada. That’s right, the cicada is still alive, but paralyzed down in that hole! And the larvae apparently know how to eat the cicada’s non-essential parts first to keep it alive as long as possible, so the meat is fresh. Told you it was gruesome. Then in the fall, the cicada killer larvae pupates, overwinters, and then emerges as an adult wasp the next summer, ready to kill a new generation of cicadas.

All of this violence is apparently going on in my back yard, where I am trying to establish a serene and restful garden to relax in and enjoy. Well, apparently it won’t be so relaxing for the dog day cicada. I’ll be okay, as long as I remember that these GIANT WASPS are not likely to attack me, unless I get too close to one of those nests, which by the way, the male wasps are guarding while the larvae are down there feasting on LIVE (did I mention live?) cicadas. I don’t think male wasps can sting you, so maybe I’ll be okay after all, even if I get too close to a nest.

If you want more info on cicada killers, try this link. If you want to know more about cicadas, here’s a link.

Oh, and while I was reading about the cicada killers, I realized that what stung me a few weeks ago was not yellow jackets, but probably paper wasps. I’ve updated that posting to reflect that and here’s a link with more info on the paper wasps.

I guess if I had my way, I’d prefer cicada killers in my yard instead of paper wasps, because the cicada killers aren’t likely to sting me. They might startle me, but I can live with that. And besides, dog day cicadas can cause damage to trees, when they make slits in the branches to lay their eggs. So, the cicada killers are actually “good insects”, in that regard, clearing my yard of a tree pest. But wait, I actually like the sound the cicada makes. I like to lay in the hammock of an evening and listen to them “singing” in the trees.

Okay, given those three insects, paper wasps, cicada killers and dog day cicadas, if I can only get rid of one, it would be the paper wasps. Definitely. Maybe.