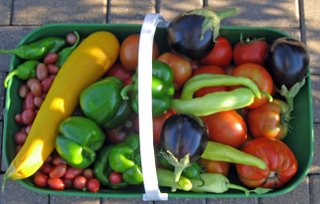 I am eating well from the garden these days. This picture is what I had time to pick on Sunday. Please notice the three eggplants. Eggplant is my favorite vegetable, and once a year I have fried eggplant. Truly food of the gods. I generally don’t eat fried foods, but I make an exception to have fried eggplant. I could eat just eggplant for a meal. Or just that and fresh tomatoes. It would also be nice if I had some green beans to go with it, and some sweet corn. Fried eggplant, sliced tomatoes, green beans, and sweet corn. Yes, that truly would be a great supper.

My troubles with green beans continue. These are my pole beans pictured here. All leaves, no beans. I goofed somewhere, perhaps too much fertilizer?

Will I ever get beans from my garden? I tried bush beans and got one good sized bowl of them earlier in the summer and that was it. I think the rabbits either beat me to the beans, or the plants were so busy trying to recover from the rabbits eating so much of the tops off, that the plants didn’t have any energy left to actually flower and produce beans.

My plan with the pole beans was to protect the plants from the rabbits until they had a chance to climb up the poles. Hanging in the air like that, I figured that the beans would be safe. I didn’t plan for no flowers or beans.

But just like with corn (hey, I picked two more ears the other day, they are somewhere in that trug pictured above), I will keep trying with the beans, to keep the rabbits away and find a good variety that I can rely on. By the way, I planted two different varieties of bush beans in the same bed, but did not keep track of which row was which variety, so I don’t know which beans I actually was able to harvest! Drats! I also tried to get some beans going later on, but guess who ate the plants before they could even flower? If you guessed the rabbits, that would be correct.

However, things could be worse. I asked a colleague at work, who I know has a garden, how her garden was and she said terrible. She said her husband put Preen all around the garden, and she thinks it stunted the vegetables so they’ve harvested very little. But she laughed and said they also don’t have any weeds. Yes, it could be worse than having no beans.

Give me weeds and a good harvest any day. Keep those chemicals out of the garden!