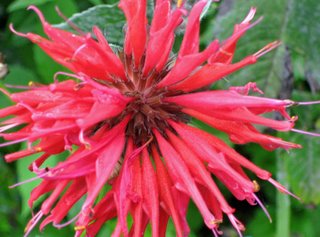 I have this bee balm (Monarda didyma) which I got from my aunt. I got a start of it over Memorial Day weekend when I was getting some mums she had that she said she had gotten from my grandmother, the one who wrote the diary. She told me the variety name of the bee balm, but I have forgotten what she said. I also didn’t ask what color the flowers would be.

So now I know the flowers will be red, and it occurred to me that I really have no other perennials in the garden with red flowers, so it will be a nice addition. It does seem to be quite susceptible to powdery mildew, and I know like other bee balm, it will self sow. So I’ll have to be careful about where I put it so that the poor looking leaves aren’t so visible, it doesn’t clash with other nearby flowers, and I can control the tendency to self sow. (Hey, I know, I’ll just cut off the blooms before they set seed!) The other nice thing about this flower is I’m sure it will attract hummingbirds. My neighbor will draw them in with her red hummingbird feeder, then I’ll have the real thing for them over in my garden! Cool!

I was thinking about other red things in the garden, as I was finishing up some weeding in the vegetable garden. The ‘weed of the year”, purslane, has red stems on it. I weeded out a lot of it this weekend, but I know it will be back. Purslane is one of those weeds where you can pull about 80% of it, to make the beds look a little neater for a while, but you know it will be back and in a few weeks, you will be pulling out bushel baskets of it again.

Last year I tried red plastic mulch on my tomato plants. Someone had done some research that said if you used red plastic mulch on your tomato plants, you could increase your harvest by up to 40%. The theory is that the plants sense all that red spectrum light and “think” it is nearby plants creating more fruit than they are, and thus they produce more fruit in an effort to win the battle of who can create the most seed, and thus ensure the very survival of the species. (It’s tough to write about that without using words like sense and think, even though I know tomato plants don’t sense in the way we do, and they certainly don’t think, do they?) I don’t know if it made that much difference in the number of tomatoes I harvested, but I do know I had a lot of cherry tomatoes!

Anyway, speaking of red, I saw my first Japanese beetle of the summer, right on schedule, sitting on a green bean leaf. These beetles generally show up around here about a week to 10 days before the 4th of July. Their wings have a somewhat reddish cast, they tend to like plants with red leaves, like purple leaf sand cherries, and they make even the most mild-mannered gardeners see “red” when they see the damage they can do in the garden! I sure hope after all I did to keep the rabbits out of the beans, that now that they are getting ready to flower they won’t be devoured by Japanese beetles. I’ve worked too hard to let that happen, so let the new battle begin! I am determined to get some green beans out of my garden (which I will cook with new red potatoes!)