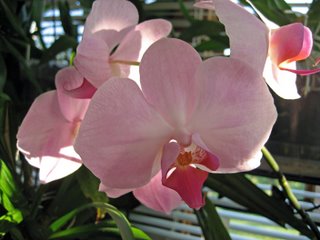 And guess what? The moth orchid is still blooming, long after the memory and scent of the night bloomer have faded. That means it has been blooming for over a month, and still going strong.

I should give this orchid a little more respect!

I purchased this moth orchid, genus Phalaenopsis, several years ago when it was in bloom and have patiently waited at least 3 years for it to re-bloom. I hope now it will bloom annually, and bloom more in the fall or winter, when it won’t be competing with all the outside flowers that have my attention now. (Not too much to ask of a plant, is it, to change when it blooms?)

I have about 12 orchid plants in my sun room, but that’s my limit because I don’t have space for any more. Some bloom with regularity; others were in bloom when I got them but haven’t bloomed since. But I know eventually they will bloom, so I keep them, even though when not in bloom, most orchids aren’t exactly showy houseplants.

By the way, I don’t consider myself an orchid hobbyist by any measure. Orchid people are like a special sub-culture of gardeners, along with gardeners who have a lot of bonsai plants. They would scoff at a mere 12 orchids and call it a good start.