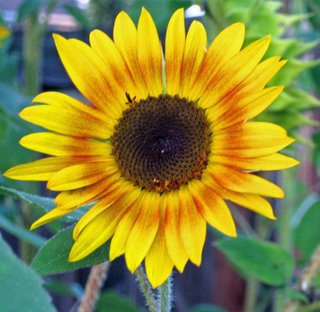 Every day I learn something new when I garden. Today, I learned more about growing corn, and how I might be more successful with it next year. For those who have kept up, I was quite concerned earlier in the summer that I would get no corn at all out of the two blocks of corn I planted.

Well, this evening, I doubled my corn harvest for the year. That’s right, doubled it. I went from two ears to four ears! And, the really good news is that I think there are probably another four ears out there to pick.

So what have I observed and learned from my first serious attempt to grow some corn in a small garden? (Yes, I waited a long time to try to grow corn!)

The first block of corn was planted on May 21st and there was very poor ear formation, and most of the ears that did form were infected with corn smut. The second block of corn was planted on June 14th and has no signs of corn smut, and has yielded, so far, two good ears of corn, which were a little bigger than the ears from the first block. There is one catch. The two later ears each had a little corn earworm in the tip of the corn.

I did not let those worms stop me from having some corn. I just cut that part off and ate the rest. I did some quick research on corn earworms (thank you, Internet!) and found out that there is usually only one earworm on an ear of corn, so I can rest assured that there weren’t more worms that I ate by accident (ewww, gross, right?). The worm is really a caterpillar and it is plenty big enough to see well before you might eat it. I also found out that late corn is more often susceptible to corn earworm.

I also think that spacing the corn out a little more helped increase ear formation in the second block. I was planting such a small block of corn (4′ x 8′) that I really crammed it into the first bed (3 rows, 6 – 8 inches between stalks) to make sure I got good pollination. When I got concerned about the lack of ear formation, my research indicated that the close spacing might be the problem. But there was very little written about my issue, so I decided to just increase the spacing in the second block of corn to about 12 inches to see if that made a difference and it seems to have. I cut out every other stalk to get to the 12 inch spacing when the corn was about 2 feet high.

However, I really don’t know if it was planting later or the spacing that increased the yield, because I didn’t follow good scientific technique of changing only one variable at a time. Hey, the summer seems short enough as it is, and I didn’t want to wait until next year to try the second variable (spacing)! Sometimes, you just have to prune.

So, next year, I’m planting my corn late, with about 12 inches between stalks, 3 rows in a bed, and taking my chances with the corn earworms. I can eat that corn if I pick it before the corn earworms really get started, but I sure can’t eat the corn smut infected corn!

Of couse, I do have to decide if tying up one of the raised beds in the garden is worth getting realistically less than 12 ears of corn. Hmmmm, I think it is, even though fresh sweet corn is about twenty cents an ear right now. There is just something about eating corn that is very freshly picked…

By the way, the sunflower picture doesn’t have much to do with the corn, except it is growing near the corn in the garden. I just thought it would make for a prettier picture than a bunch of corn stalks.

Did I mention there is always something to learn about gardening? The next thing I need to learn is what is wrong with the grapes. A week or so I noticed a couple of grape leaves that started to look like this: 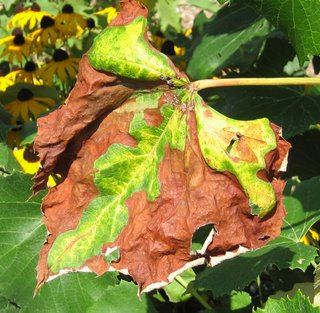 I am concerned because this looks like a diseased leaf to me and not what you would expect to see if a leaf was just drying up. Plus not all the leaves are like this, just a few. This is a Concord grape and I thought earlier in the spring that it might not have made it through the winter, as most of it died back, but it came back with a vengeance. However, it didn’t produce any grapes, and now these leaves concern me. So, anyone have any ideas on what I might be dealing with here, or if I should be concerned? My Internet research, brief as it was, didn’t provide me with answers yet, but I’ll keep looking. Yes, there is always something to learn.

Oh, and one other thing… the reason I know the planting dates for the corn is because I keep a record of what I do in the garden, at least the major items, and when things bloom, etc. I don’t go to the extent of recording, for example, what the spacing of the corn was, but I try to record enough info so that I can refer back and at least see when things were done. I find myself referring back more than you would think. So, if you don’t keep garden records, you ought to start. I use a 10 year journal and I’m in year 6.