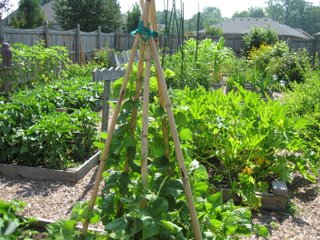 Why were there so few green beans? I planted a 4’ x 8’ bed with two varieties of bush green beans (‘Contender’ was one of them) and elsewhere in the garden I added a teepee of pole beans (‘Kentucky Wonder’). From all this, I got just one good picking worth of green beans. I do know that part of the problem was the voracious appetite of the rabbits, but I overcame that by covering the beans with white cloth until they had reached a size that I thought was big enough to withstand some bunny nibbling. But why would pole beans yield almost nothing, other than lush green growth? Too much fertilizer?

Is it worth it to try to grow corn in a small garden? I was concerned that I would not have enough corn for pollination, and it turns out my real problem was that I didn’t get good ear formation. I had overcome what I was taught growing up, that you need a big corn patch to get any decent corn and taken the plunge. My reward? The seed company said I planted the corn too close together, which is why I didn’t get good ear formation. Then, on the ears that did form properly 95% were attacked by corn smut. I got two clean ears, and then maybe 4 more that had corn ear worm. I removed the darn worms, one per ear, and ate the corn anyway. I clearly need to decide if it is worth planting two raised beds in corn next year!

How can I get some tomatoes earlier than mid-late July? It seems no matter the variety, the 1st tomato ripens around July 20th. I planted ‘Early Girls’ just to get earlier tomatoes, not for the taste, but my 1st tomato was not one of those, it was a ‘Brandywine’. In fact, the ‘Early Girls’ seemed to produce as late into the season as any other tomato. The big surprise of the tomatoes was a new-to-me heirloom variety ‘German Johnson’, which I liked so well that I decided to try to save some seeds from it.

Some of my other lessons from the vegetable garden…

Clearly, raised beds is the way to go. I never have to till the beds and they dry out faster in the spring. So, the only weather worry I have in the spring is around frost. Even a day or two after a rain, I can generally spade up and plant a raised bed. I can also easily weed one or two beds at a time and so the whole garden looks nicer.

I shouldn’t plant the flowers in the back of the garden. I plan to move those up near the front because I think I will enjoy them more, and be more likely to cut them to bring into the house. In the back behind the corn and tomatoes, they were a bit lost and not allowed to do what they do best, add color and beauty.

I should plant fall vegetables. I got kind of lazy toward the end of the season and didn’t try to grow any late season lettuce, spinach, radishes, etc. In the spring, I can’t wait to get out and plant them, but I am less inclined to do so in August. I have the ideal situation for it with the raised bed, because by then, a few beds are cleared and just begging to grow something.

Home grown always taste better. I will always have a vegetable garden. Always.