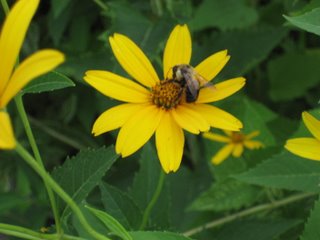 Lazy days of summer. The bee above didn’t even attempt to fly away when I took this picture. It’s sitting on a False Sunflower, Heliopsis helianthoides.

My youngest sister was surprised to hear that the flower on the night-blooming cereus only lasts that one night, and by morning it is just a drooping mass of petals. All that waiting, and it’s over in one evening. I now wait and hope that it will either bloom again later this summer or next summer or maybe 6 years from now. Hard to say when it will re-bloom, but I know it will bloom again, and it will again be an event.

I started to harvest zucchini a few days ago, and have picked 8 small ones so far, and more are coming on. I’m trying to catch them when they are small. I should have cucumbers in a few days and maybe, just maybe, some green beans (Yes, even after the problems with the rabbits eating the bean plants, I believe I will finally get some green beans this year.)

The daylilies are all in full bloom. I went to my favorite daylily and hosta nursery this morning just to see the daylilies in bloom. There were so many pretty ones. They had a lot that were pink, purple, and even maroon that I thought together would be an interesting combination. But alas, I have no open areas for them now. Maybe next year, if I dig up some more garden beds later this summer or fall, I’ll have room for more daylilies.

While there, I swear I overheard the owner tell someone that if the daylily they had their eye on to purchase turned out to be too tall for where they wanted to put it, they could dig it up in the spring and BRING IT BACK. The only time I’ve ever heard I could return a plant was if it died in the first year. Imagine returning a plant, just because it wasn’t quite right or wasn’t what you really had in mind?

While you ponder that, check out My Garden Pictures for some info on Shrubby St. John’s Wort growing in my landscape.