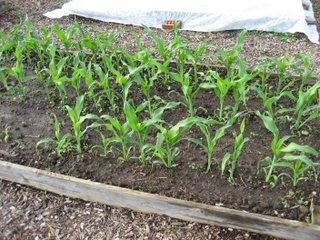 What I like about vegetable gardening is how quickly plants grow and how good the produce tastes when you harvest and eat it fresh. This evening, I planted some more green beans after pulling out the last of the lettuce, which had started to bolt and turn bitter. I also planted another block of corn. (It’s under the white garden cloth in the picture.)

I am trying a supersweet variety called “Mirai” from the Park Seed Co. They lured me in with an email about it in February. If it is as good as they say it is, I’ll be pretty happy. They caution that you should not have any other corn planted within 50 feet, or you will get cross pollination with that other corn, and the Mirai corn won’t be as supersweet as a true “Mirai”.

Thankfully, (or regrettably in some ways), none of my neighbors have vegetable gardens, as far as I can tell, so there is no chance of cross-pollination ruining the sweetness of my corn. A few of them are growing some tomatoes up by their houses, but no one has a GARDEN, at least not in the backyards around my backyard. What’s wrong with these people?

I suppose they are afraid that the garden will be TOO MUCH WORK. In the book, “The American Gardener” by William Cobbett, the author advises that to prepare the ground for a kitchen garden, you should turn over the soil to a depth of TWO FEET. Now, if this is the book someone picked up to learn how to plant a garden, I can see why they would be hesitant. Did I mention he wrote his book in 1856? Times have changed since then!

I didn’t do any digging down to two feet for my vegetable garden. For some of my raised beds, I merely killed off the grass (with Round Up, but it has been more than three years ago), set a frame on the ground, put down several layers of newspaper, covered that over with organic matter, some of it not even that well composted, and then put top soil on top of that. Now after several years of continuing to add more top soil and compost, and turning over the ground in the spring with a spade to whatever depth I can manage, I’ve got some good soil to grow vegetables in. If someone had told me the first thing I had to do was dig down two feet, I would probably be gardening in pots on the patio!

Anyway, back to the corn. I’m looking forward to at least a few ears. I don’t have a lot of corn planted, but hopefully I have enough to get good pollination, and a few good ears of corn. I read an article on how to grow corn in small spaces, and tried that method as best I could. I can’t wait to see what I get!

(Check out My Garden Pictures to see “sweetspire” in bloom)