I just harvested figs I grew myself in Indiana on a fig tree growing outside. You can grow figs too!
Whenever I harvest a bowl of figs I am tempted to arrange them in a lovely still life setting, suitable for a Renaissance-style painting. Even though I cannot off the top of my head recall such a painting.
Figs just look old-worldly to me.
Would you like to know my secrets for growing figs, Ficus carica, in the ground in Indiana, Zone 6a?
First, I chose varieties that are known for being a bit hardier than most. In my case I first planted ‘Brown Turkey’ and then added ‘Chicago Hardy’ a year later.
I planted them out on the edge of the vegetable garden. Neither gets much protection from winter winds, though ‘Chicago Hardy’ might get a little protection since it is planted closer to the fence.
In the late fall, I pile up shredded leaves around the base of the figs and wish them well. Then in late spring, I pull back the leaves and cut the branches back some but not all the way to the ground. I wait to see where they bud out in late spring and anything that didn’t bud out, I cut back then.
The plants grow all summer and become large shrubs, probably six feet tall by six feet wide. They bear fruit that is usually ready to harvest by late September into early October. They can survive a light frost but once we get a heavy frost, they are done and it is time to pile the leaves around their bases once again.
Of the two varieties—’Chicago Hardy’ and ‘Brown Turkey’—if I had to choose just one, I would choose ‘Brown Turkey’. It produces much larger figs and they tend to ripen sooner.
In fact, I gave the ‘Chicago Hardy’ a stern look earlier today to give it fair warning that if it doesn’t start ripening its fruit earlier and making it bigger, it won’t be around after next fall. One more year!
This picture from earlier this summer shows how big the fig plants get. 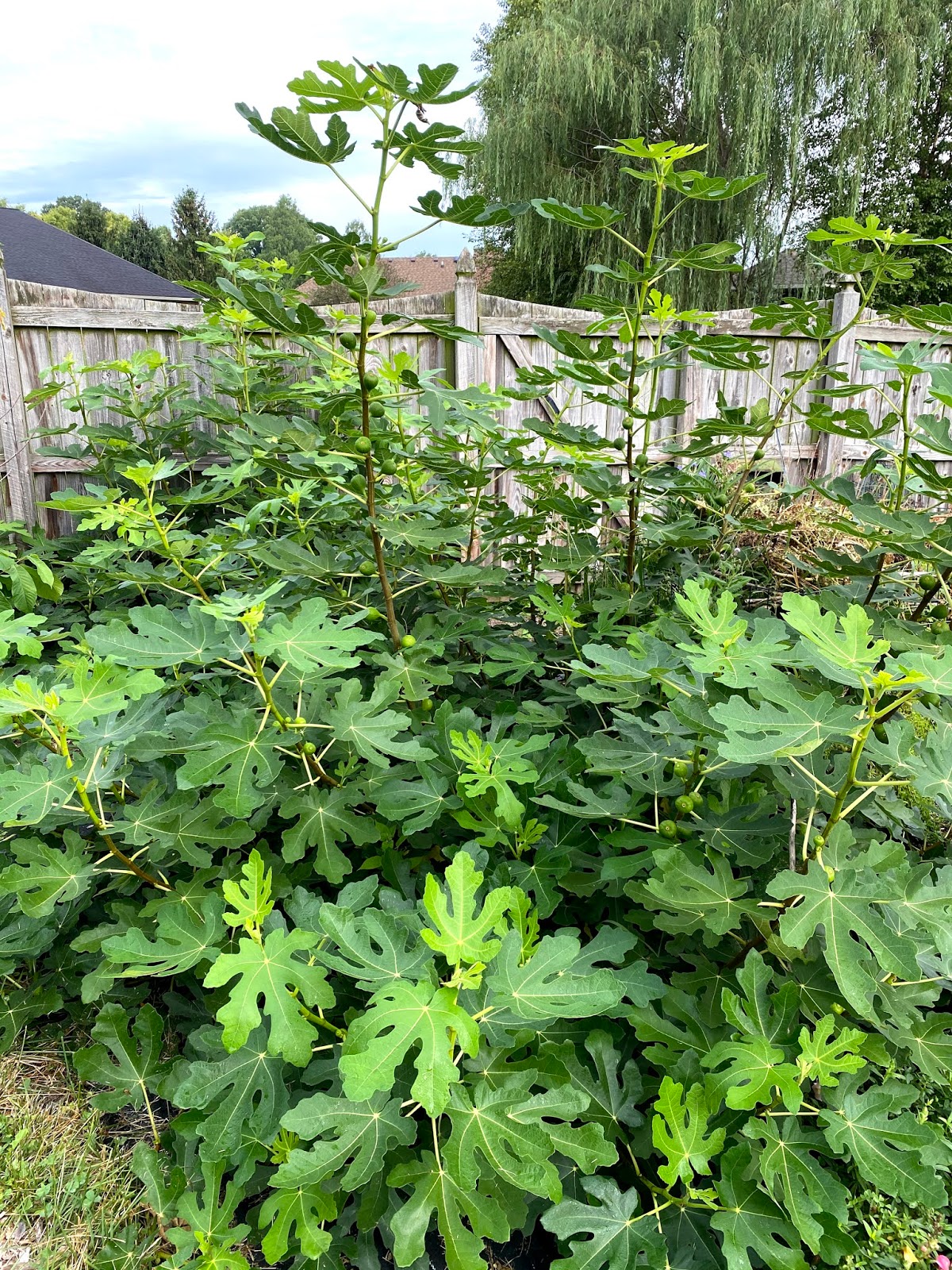 ‘Brown Turkey’ is in the front and ‘Chicago Hardy’ is hiding behind it. There is a path between the two but they have taken it over and made it nearly impassable. The fence behind them is six feet tall, give or take.
Later in the fall, they look a little less sharp, but are still big plants. In a few weeks, I’ll pile leaves up around the base of each fig to protect the roots again and plan for another season of ripe figs next year. In Indiana!