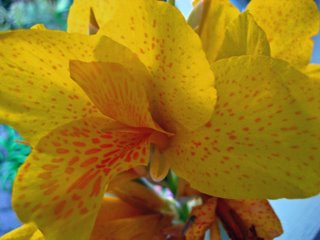 I once suggested that a theme for a garden might be “freckled flowers” or “flowers with spots on them”. We could include many types of lilies, some foxglove, and this lovely canna blooming in a pot on my patio. Maybe I am partial to freckles since I wear a few of my own, but I like spotted flowers.

I even tell people that the spots are garden fairy foot prints, because that’s just a little more fun, right? So the theme of the garden might really be “plants that attract garden fairies”.

What else would you include in a garden intended to attract the garden fairies? How about pink fairy lilies? (Zephyranthes) But wait, they don’t have freckles on them. I think the fairies pick them and wear them as hats or something like that. 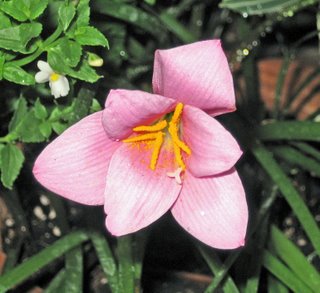 I’ve not shied away from admitting that there might be garden fairies lurking amongst my flowers. Most people generally think of them as as being in English gardens only, but I hope a few “faeries” came across the Big Pond, perhaps stowed away in Wardian Cases amongst flowers that the British just could not leave behind when they came to the New World.

I’ve provided some ‘evidence’ of garden fairies in a previous post about unexplained events in the garden, but I’ll admit the evidence is primarily circumstantial and might not hold up under close scrutiny.

But, it’s fun to think about having garden fairies none the less, and isn’t a garden supposed to be about fun?