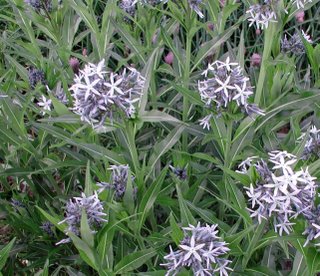 Blue Star Dogbane blooming last May 5th in my garden. The high temperature on that day was 67 degrees. I bet we got close to that temperature today.

We’ve been enjoying unseasonably warm and mild days over the past week, and are expecting a few more such days early in the week. Then on Wednesday or Thursday or Friday, depending on which weather forecast you look at, the weather will change dramatically. Instead of a high temperature in the mid 60’s like we had today, by Friday the high temperature will be in the low 30’s and we will likely see some snow.

When it gets warm like this, I always remember the stories I read when I was younger about the pioneer children. It would be unseasonably warm so they would walk to their little one room school house with no coats or scarves or mittens. And then without warning, a blizzard would blow in, seemingly out of no where, leaving them all stranded and huddled together to try to stay warm and alive until the pioneer dads made it through to rescue them.

I hope we don’t have a blizzard later this week. I only remember two blizzards in central Indiana. One for sure blizzard was in January 1978 and the other was in December 2004, right before Christmas. I’m not sure if the December 2004 snow was officially a blizzard, but it was bad and snowy, especially south of here. When we have snow like that around Christmas, it really messes up the plans of the last-minute shoppers (if they have any plans at all).

I was not a shopper this weekend. I did some online shopping but didn’t attempt to go out early Friday to join in all the Black Friday madness. Instead, I took advantage of these past few days to clean up the garden. I chipped and shredded quite a bit. Most everything shredded fine except the Blue Star dogbane (Amsonia tabernaemontana). I put it through the chute and noticed that the chipper would grab it and pull it through. I hadn’t noticed that with any other debris, so I thought “Hmmm… the chipper really loves dogbane”. Then the chipper stopped. It turns out that the chipper did not love dogbane after all. There must be some strong fibers in those branches because instead of being chopped up, the fibers in the branches were wound up tight around the cutting blade, causing it to stop. It took me a few minutes to cut all that loose. Yes, everyone, I unplugged the chipper before I attempted to free up the blade, and I wore gloves.

I also mowed the grass today, potentially for the last time this season. We shall see and hope. The latest I’ve had to mow is December 1st. Yes, I have records of events in the garden, don’t you? Oh, you don’t consider mowing an event? Well, you should at least consider the first and last mowing as events. It’s easy to know when the first mowing occurs, but the last? That’s why I keep records of all the times I mow, because until several weeks have passed, you don’t really know that the last time was the last time.

Yes, I took full advantage of this warm day, because we don’t usually have this kind of weather at the end of November. In addition to finishing up the garden cleanup and mowing, I also put up most of my outside Christmas lights.

I wonder what the temperature will be when I take those lights down on New Year’s Day?

Have a great week.