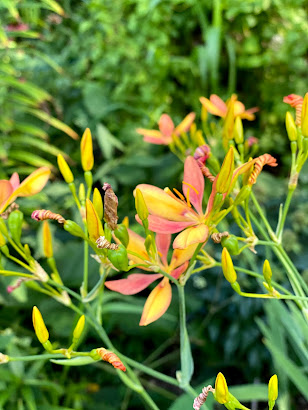 Years and years ago, going back to the beginnings of this current garden, I purchased seeds for a flower called candy lilies.

At the time I bought the seeds, the candy lily was considered an intergeneric hybrid, a cross between two plants from two different genera. You don’t find those very often, for a variety of reasons!
Then both parent plants were reclassified by the plant taxonomists and both ended up in the Iris genus.  So now I’ve just got a regular ol’ hybrid, probably Iris x norrisii.
To further confuse things, sometimes I just call them blackberry lilies, another flower which is Iris domestica.
And to add confusion on top of confusion, for some reason, we all insist on calling these lilies when they are irises.
Maybe they should be called candy irises or blackberry irises?
You know what I like about these flowers?
I like how the petals twist around themselves when the plant is done flowering. That’s a nice touch because often flower petals just fall off or droop or even worse, turn to mush when the flowering is over. (Yes, I’m talking about a lot of double-flowering flowers which have way too many petals!) It’s nice when a flower looks good even as it fades.
I also like that these plants don’t take up a lot of room—just a few sword-like leaves— and have come back reliably, probably from seeds, for decades. Decades!
******
Dee Nash and I talked about blackberry lilies on this week’s podcast episode which I called It Takes Two to Tomatillo.  I know, the title doesn’t allude to the blackberry lilies, but I swear we discussed them.
Also, this week, I sent out my first monthly email newsletter. If you meant to subscribe to it and didn’t get around to it, let me know. I can forward the newsletter to you after you subscribe via the form on my author website!
******
Earlier in the day, I managed to spread three more bags of mulch. Just six more bags and those stacks are gone and the patio will once again be an area of rest and relaxation and not a showcase to my laziness!