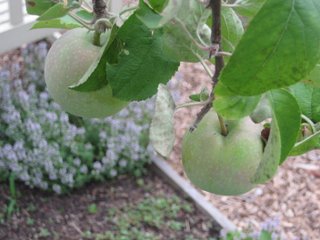 There it is. Two-thirds of my apple crop for this year. I have just one apple tree, which I planted in the center square of my raised bed vegetable garden. The variety is Red Delicious, and the only reason I have this variety is because that’s what the garden center had when I went looking for a good apple tree last year.

My plan, right now, is to keep this dwarf apple tree trimmed back enough so that it provides a little bit of fruit, but doesn’t become a source of shade for other parts of the garden.

However, the top half of the tree died out this winter, giving it a very awkward appearance, so I still have not reached a decision on whether this tree stays or goes.

I am also not particularly fond of Red Delicious apples, so this may be a tree that ends up going regardless, to be replaced with a variety more to my liking. Maybe I’ll pick a variety developed at Purdue University, like GoldRush? Boiler up! Sounds like if I get GoldRush, I’ll also need a variety like Jonafree for good pollination. Now I have to figure out where to put a second apple tree.

(Do you see how garden projects just materialize? You go from having one apple tree, not thinking too much about it, to wanting to take out the one tree and replace it with two other trees, which involves figuring out a location for the second tree, researching which varieties to get, and on and on!)

My dad had a “five variety” apple tree for a while. What the nursery did was graft 5 different apple buds (scions) to one root stock, so you could get more than one type of apple with only one tree. This also ensured that you would get good cross pollination from one variety to another. I don’t remember the tree lasting too long. I think he got it because of the novelty of getting five types of apples from one tree, though I never remember us getting many apples at all from it, so maybe it wasn’t such a good idea.

I’ve heard that writing leads to critical thinking. So, after writing this update, I’ve thought through my apple tree situation and have reached a decision. This tree goes, and I will get two new apple trees that are better varieties. After all, I’m going to have to live with these trees for a good long time, hopefully, so I should have the varieties I like, right?

Rest assured, however, that I won’t cut down this tree or try to transplant it – does anyone want it? – until I’ve harvested my three apples and figured out what apple varieties I will replace it with.